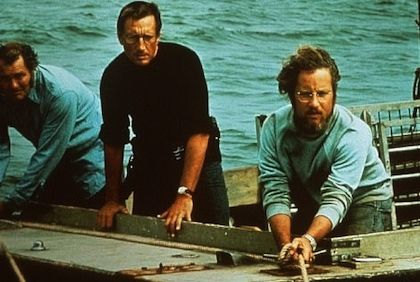 In the spirit of the 4th of July, I am tackling not only one of Steven Spielberg’s most beloved movies, but also one of the best movies ever made about three well-tanned men trying to drown a shark with beer kegs. Jaws was released in the summer of 1975 and quickly dominated the box office to such an extent that it is often credited for creating what we know as the “summer blockbuster”. This classic film tells the story of a great white shark that decides to add the citizens of a New England seaside town to its menu. His plans are quickly put on hold as he suddenly finds himself pursued by the town’s delicious chief of police, a juicy marine scientist, and a rather gamey but crusty shark hunter with a harrowing past.

Jaws is oftentimes referred to as a great horror film, but in actuality the film that people have been enjoying for nearly 40 years is one of the greatest adventure movies ever made. Allow yourself to view the sample clip below.

As you can see, the movie is more than just a shark snacking on innocent swimmers. This movie has everything from humor, horror, adventure, camaraderie, tension, and (yes) an admiration for nature. But let’s put all that aside for a few minutes so that you can focus on who I’ve chosen to replace those three iconic actors that you just watched above. A special thank you goes out to my friend and fellow writer Rick Rodriguez for helping me to hash out this recasting. We had some disagreements when it came to the final choices but there is one thing we definitely agreed on -- if this movie were to be remade, then the shark would NOT be CGI. Trust us, the movie would be all the better for it. 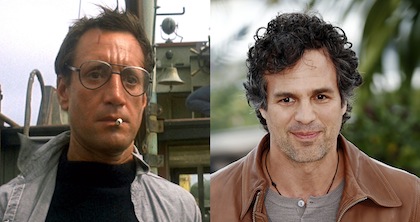 There is nothing particularly heroic about Chief Brody when you initially look at him. He is a kind and caring family man who seems more at home busting kids for skipping school than he does battling a 25-foot Great White Shark. But as many have said before, true courage is doing what needs to be done even when you’re absolutely terrified while doing it. That being said, I’ve decided to cast The Hulk in this role. Seriously though, if you look at Mark Ruffalo in The Avengers, you’ll see an average-looking sort of Everyman that is willing to put himself at risk in order to help others. The last thing I wanted was a chiseled Hollywood player for this role. I wanted somebody that could not only evoke that good-natured/small town feeling, but somebody who could also be affective when the action begins. I must admit that I almost cast Andrew Lincoln (better known as Rick Grimes in "The Walking Dead") for this role. But that kind of laziness is rarely seen outside of government buildings and the "Lost" writing room. Nope, for my money, Mark Ruffalo is the man for this job. 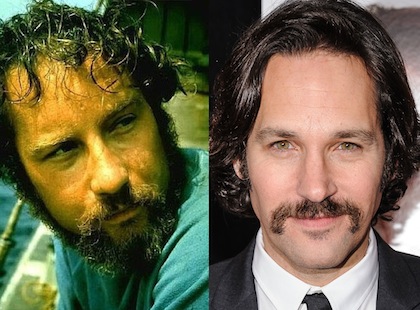 Hooper is such a fun character and probably my favorite out of the three. His passion for his chosen profession and his excellent sense of humor make for one hell of an entertaining figure. This role was pretty hard to cast and I thought about it for a good long while before Paul Rudd popped into my head. Immediately I liked him for the role because not only has he proven to be a funny actor in the past, but there is also an intensity behind him, even when he’s being funny, that I think is absolutely perfect for this character. Rudd is an incredibly talented actor, and personally think that he would excel in this role. 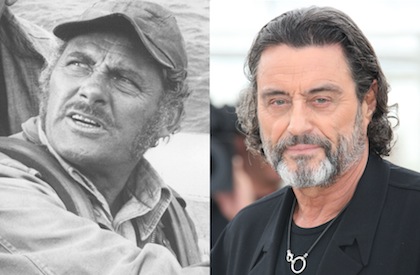 The character of Quint is essentially the “Ahab” of this story (for you literary scholars out there). You come to find that, beneath his blustering and aggressive surface, there is actually a haunted and scarred man who has never truly gotten over the devastating tragedy in his past. Ian MacShane once played a pirate in a very boring movie about pirates, but that’s not why I have chosen him for this role. On HBO’s "Deadwood", MacShane proved that he has the salty and aggressive qualities that are perfect for Quint, but he also proved that he could evoke sympathy and likeability as well. I considered other actors, such as Russell Crowe or Mickey Rourke, for this part, but in the end, I think MacShane is the perfect person to play this wily old sea dog.