Reasons "The Haunting of Bly Manor" Is a Worthy Follow-up To "Hill House"! 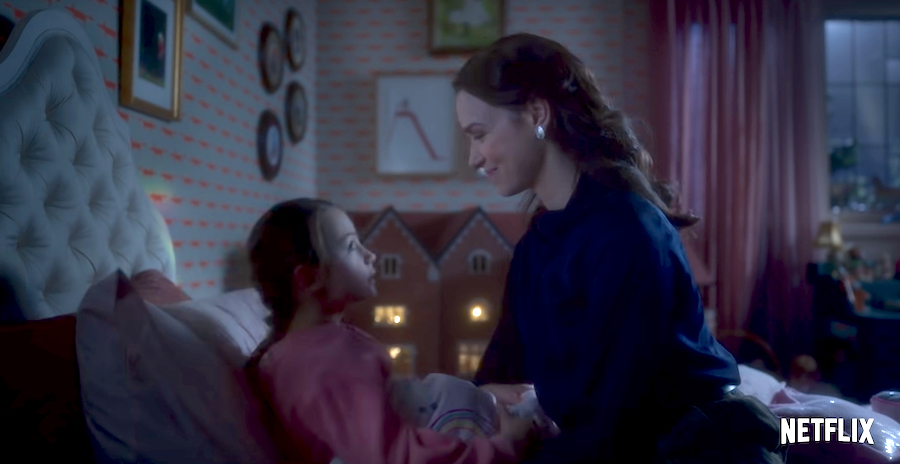 Just in time for Spooky Season, Netflix released the drama series “The Haunting of Bly Manor”, a followup to the insanely popular “The Haunting of Hill House” from 2 years ago, and it is, as Flora would say:

The 9-episode series features Danielle (played by "Hill House"'s Victoria Pedretti), an American who moves to the United Kingdom to escape her dark past. She takes up a position as an au pair for two young kids whose parents died on a trip a few years prior, and whose previous au pair drowned herself in a lake on the premises. Dani, who is trapped with her own demons following her, soon realizes that there are even more sinister spirits trapped in the house.

Though this show may not seem suitable for the faint of heart, it is the perfect show for all audience types, and here is why you should watch it if you haven’t already!

If you’re as easily spooked and jumpy as I am, you probably wouldn’t think a show about a haunted house is for you. However, “The Haunting of Bly Manor" isn’t as scary as it seems. Though you should beware there are a few jump scares, each one is built up in a way so you know it's coming, making it easy to avert your eyes or calm your racing heart beforehand.

Furthermore, as dark as the show may sound, it is not gory or overly violent, and there aren’t any demons with terrifying faces. In fact, if you choose to watch it, you’ll see it’s the exact opposite… which is a bit creepy, but not veryscary. Plus, the storyline is interesting enough that you’ll want to continue watching, which leads me to my next point --

2. The storyline itself is captivating

Many horror movies and TV shows tend to rely on the scary factor to keep audiences watching, no matter how bad the storyline is. However, “The Haunting of Bly Manor” does the opposite of that. It doesn’t try so hard to be a scary show that the storyline is lost. This show gives a variety of characters and makes sure that all are well-developed with a history as to how they got there.

The show starts with a mystery woman telling the story of Dani and the manor at the end of a wedding reception, with everyone sitting around the fire telling scary stories. Although this woman continues to narrate throughout the show, you almost forget that she was there, despite the gnawing question of what character she could possibly be, and the revelation at the end is very bittersweet.

3. It features LGBT characters without focusing on that as the main storyline

One problem is Hollywood has always been the lack of LGBT representation in TV shows and movies, but as any Netflix fan knows, they’re not afraid to include the LGBT community. While it's nice to have LGBT-focused shows like “The L-Word” and “Orange is the New Black”, it’s also great to see the LGBT community included in shows naturally. Though we won’t spoil who, there is a main LGBT couple in this show and none of the characters make it into a big deal (even though the show takes place in the 1980s). They all just act as if they were no different from a straight couple. And despite the many romances in the show, it is never the focus of the show, but rather played out naturally, keeping the show focused on the events taking place.

Overall “The Haunting of Bly Manor” is not the scariest show, but it is definitely worth watching for horror fans and non-horror fans alike, as well as anyone who likes an interesting, yet not overly long series, or maybe just likes to see a little LGBT representation once in a while. As a character points out in the final episode, "It's not a ghost story; it's a love story."

If you haven’t yet watched it, this Halloween weekend is the perfect chance to get some friends together and enjoy some light jump scares and a great story!