Harry Styles Whisks Us Away On a European Adventure for New "Golden" Music Video! 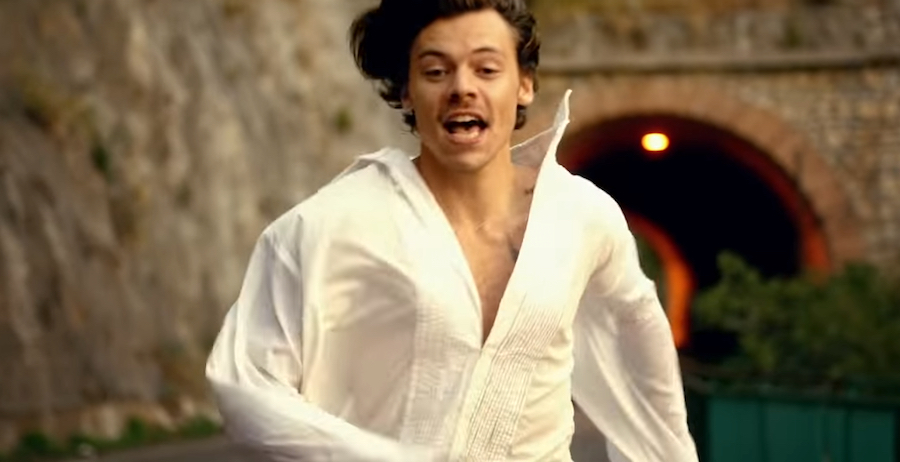 Harry Styles galivants through Italy in the music video for his latest single “Golden”. The song opens his sophomore album Fine Line, released in December of 2019. Fans speculated that Harry's next single would be “Golden” after spotting the singer filming on the Amalfi Coast in late-September. Social media posts showed Styles donning a white cotton button-down and shorts while running through the streets of Italy.

More of Harry in Italy today - September 23 (via opsmyri) pic.twitter.com/vHfeBh5mkk

Devoted fans couldn’t contain their excitement when viewing the photos and videos circulating on social media! The speculations made by fans were confirmed when Styles posted onto his social media accounts a photo of himself standing in front of the Amalfi Coast basking in the sunlight on October 23. The “Watermelon Sugar” singer heightened fans' anticipation by posting a 15-second video of him running towards the camera in a tunnel, with the caption “GOLDEN. OFFICIAL VIDEO. OCT 26 2020.”

It wouldn’t be a Harry Styles music video without breathtaking visuals. Ben and Gabe Turner directed the highly-anticipated music video, which begins with the British pop star running through a tunnel, continuing with him sprinting on the open roads, then cutting to the pop star driving along the Amalfi Coast, looking dashing as always. He is also seen playing in the water and pausing traffic while stopping in front of a bystander’s car at the end of the video.

The music video gives us the dose of serotonin that we all need during these unprecedented times and making us imagine what it would be like to run through the streets of Italy with a sun-kissed Harry Styles.

Along with releasing a video for “Golden”, Styles also released an exclusive merch line inspired by the song!

Styles — like many other artists — was expected to be on tour this year, but due to the pandemic the singer has postponed his tour until 2021. He is also getting ready to celebrate the first anniversary of Fine Line by releasing a limited-edition vinyl box set.