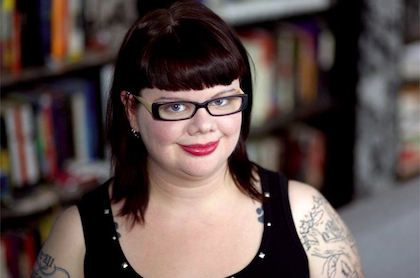 Young adult novelist Amy Spalding recently released her first book, The Reece Malcolm List, which tells the tale of Devan, a plucky 16-year-old musical theater star who is sent to live with her mother in Los Angeles after her father dies. Devan knows very little about her mother -- except that she is a best-selling author and likes strong coffee and bourbon -- so she keeps an ongoing list about her. Devan is quickly enchanted by L.A. (and her mother), but when her list gets a surprising entry, she wonders if she will lose anything.

Having read The Reece Malcolm List, I can say that the book is charming, witty, and touching. Spalding’s writing reminds me a bit of Emily Giffin’s (particularly her work in Where We Belong), as both authors are able to create relatable, likable female characters. Spalding’s work has a whimsical feel to it that is reminiscent of the recent “The Carrie Diaries” on the CW, in the sense that she captures the anguish of adolescence but the excitement and wonder as well.

Ms. Spalding chatted with me about her favorite musicals, why she thinks L.A. is a funny city, and what we can expect to see from her next!

YH: Where did the idea for The Reece Malcolm List come from?

AS: I'm really into reading stories, or watching shows/movies about long-lost family. I think it’s such an interesting dynamic for someone to be an intimate relative, even if you’ve never met them. I like exploring the dynamics of someone being strange and a relative all at the same time, and having to sort that all out. So, I decided since I like to read stories like this so much, I should write my own!

YH: Like Devan, you too are from St. Louis and moved to Los Angeles. Are some of her experiences based off of your own? What did you first think of L.A. when you arrived?

AS: I definitely used some of my initial impressions of L.A. to color in how Devan saw it, because I thought she’s a girl who’s from the same part that I am, so we are both going to have some of the same initial reactions. I first visited L.A. about 10 years ago before I actually moved here. I remember thinking that everyone was dressed so casually but well, and that the weather was extremely nice. I really liked L.A. The weather was gorgeous, the people were pretty casual, I felt very comfortable. I definitely tried to inject that feeling of falling love with a really funny city into the story. I find L.A. funny. People tend to think of L.A. in terms of Hollywood and the entertainment industry, but it actually has a very small town mentality. I have always felt more accepted here in L.A. than I have back in the small town of Missouri where I’m originally from. 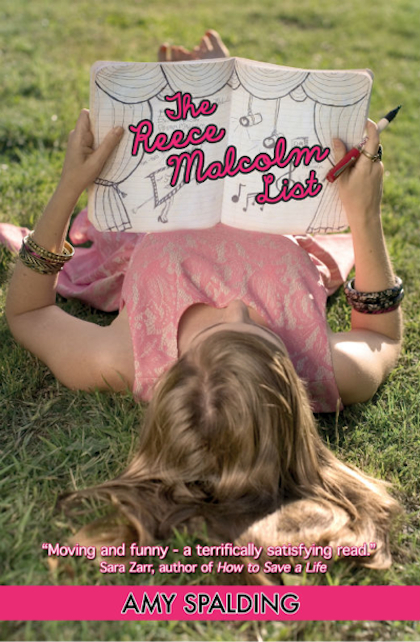 AS: I really don't. I love musical theater -- I’ve been a fan of it since I can remember because my friends were really into it. It’s always been a part of my life. I stage managed a little bit in college, but that’s about it. I've never been a performer, I definitely don’t have the vocal ability of Devan, that’s for sure! I can do okay at karaoke. But I do have such a love of theater; I have friends who are involved in theater from acting to writing, that it was pretty easy for me to create this world.

Writing this book has made Merrily We Roll Along become my favorite musical. I have such a close bond to it now, because I feel like it went through the play through my own artistic process. The show is so much about love, friendship, and creating art, and making a living creating art. I think that, for most people living in L.A. in their 20s and 30s, these themes are really familiar themes. I also love Ragtime... Evita is one of the first shows I saw that blew my mind. It was much weirder and darker than I expected, and that was exciting.

YH: You are also known for doing improv in L.A. and are on quite a few improv teams. How did your improv background help you when writing this novel?

AS: Believe it or not, I was through my first draft when I started doing improv. Initially, improv wasn’t a part of my writing background; I actually have more of a writing background than I do of an improv background. Amazingly, improv so quickly changed how I looked at things. It gave me new dimensions to look at things. Improv is so much about trusting your instincts, what’s natural, and how to make quicker decisions. I would agonize over a side character’s name for like a day! But when I’m doing a scene, I would just say “Bob”, his name’s Bob, we’re going to go with that. Improv helped me to trust my own instincts and not get hung up on things at the moment. And because I haven’t been a performer in a musical, I didn’t have that background of bonding with the cast. I may have been backstage, but I was a little separate from the actors. But once I had been in improv classes and started to join teams, I learned that I needed to rely on my teammates and that they relied on me. I really gained a new appreciation for what it is to be a performer. This really helped me write about the kids doing the show, and how your relationships can change whether for the good or bad.

YH: Why did you pick the musical Merrily We Roll Along for Devan and co. to be in?

AS: I would love to tell you that it was a great idea on my part, but it wasn’t. I needed a musical, and I didn't want to do a typical high school musical like Bye Bye Birdie or Anything Goes. So I asked friends of mine who had done high school musicals to see which ones would be good for Devan, and which one would have a great role for Devan. Two or three separate people who didn’t know each other suggested Merrily We Roll Along, and that seemed like a sign to me. I researched it; one of my friends had a really janky version of a production done at the Kennedy Center, so I came over to watch it and I fell in love with it. It became so clear to me that this was the right choice. I bought every cast recording that existed and watched that video a million times. It was honestly a lucky accident, and I was able to find so many themes in the musical that resonated in the book. So, thank God for other people!

YH: Have you ever thought about The Reece Malcolm List as a film? And if so, who would you want to cast in the main roles?

AS: I thought of it more as a television show, because it is more long-arched in terms of narrative, and explores things on a weekly basis versus a two-hour block. That said, I don't like sharing the specific actors I would want to cast in the roles because I want everyone to read it and have their own original idea of what the characters look like and sound like. I hate it when you hear a certain actor, and then that’s all you can hear when you read the character. I do love it when people tell me who they would like to see cast in the roles. I did have someone suggest Emily Blunt as Reece, and I was very happy with that suggestion. But so many of the characters in the book are so young -- I’m a dinosaur compared to a 15-year-old, so when people ask who I could see as Devan and her friends I say, “I don’t know. Kids?” [laughs] It could be really cool to cast unknowns in those parts.

YH: How many of Devan's own high school experiences were based off of your own?

AS: I think that one thing from Devan that really came from me are her doubts around other people, her fear of trusting other people, her assumption that if one person has a problem with her, then they all do. I still sometimes deal with friends and acquaintances that way; I don’t want to get up in anyone’s business if they don’t want to deal with me. [laughs] It’s funny because I can see that I need to work on this, but instead I gave this problem to a 16-year-old. So, that was really close to who I am. A lot of the other stuff I would say was less so like myself. I never attended a high-pressure performing arts school. I think that, at a school like Devan’s, there would be a lot more jealousy and competition. Your classmates aren‘t just your classmates -- they’re your competition for roles and for opportunities. If there’s a scholarship to school, you may be fighting your best friend out for it. That’s very different than what I went through in high school. We all knew that we were going to go to college somewhere, but we weren’t all chasing the same opportunities.

I do think that, in high school, there is some competition that we go through. Like, you might all like the same guy, but only one of you will get him. Or you may all be competing for the same award. I think in small ways, there is a relatability there, but it is in a super-heightened situation.

YH: What can we expect to see next from you?

AS: Well I am in the midst of editing my next book, which is called Ink Is thicker Than Water. I am the point of editing where I ask myself, why I am doing this? I am a terrible writer, I have no good ideas, etc. Every compliment on The Reece Malcolm List just makes me say, well, now I need a second one! That’s what I’m working on now. I expect that, in a week, I will be on the other side of editing, where I will think that I’m unstoppable. [laughs] So, editing with an editor is an interesting process, because suddenly someone is very directly telling you your flaws. It’s a great thing, but it’s also really terrifying. It’s a weird thing that the thing that will help you the most will destroy you. Of course, you need to know what doesn’t work so that you can make it better, but it’s still one of those aspects of life where I can’t believe I’m doing this willingly. But I enjoy it nonetheless.