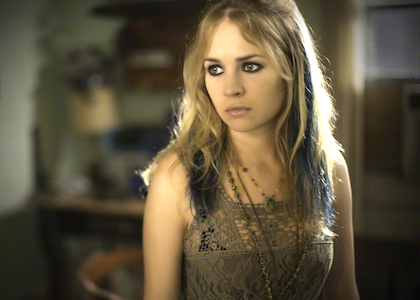 Up-and-coming actress Britt Robertson recently starred in the indie drama, White Rabbit, which also stars Sam Trammell (“True Blood”) and Nick Krause (The Descendants). This haunting film focuses on Harlon (Krause), a troubled teenager whose father (Trammell) forced him to kill a white rabbit in his youth. Now bullied by his peers, Harlon begins to have visions of the rabbit, and his mental illness begins to spiral out of control. When he meets Julie (Robertson), the new and rebellious girl in town, he thinks that he has finally found his soulmate. But once she begins to change, his mind finally snaps. White Rabbit is a stark film, but its simplicity works to its favor. The actors deliver harrowing performances, and it’s a film that questions what happens to those who do not receive the support they need. Watch the trailer below:

In addition to White Rabbit, Britt also has a starring role in Disney’s Tomorrowland, landing in theaters this May. Loosely based on the actual land at Disney theme parts, Tomorrowland follows a young teenage girl (Robertson) and a former boy genius (George Clooney) as they embark on a journey through a place filled with secrets, that exists somewhere in time and space between their memories. The film was directed by Brad Bird (The Incredibles) and has already garnered quite a bit of curiosity. Check out the trailer that aired during the Super Bowl below:

In real life, Britt is refreshingly down-to-earth. Originally from North Carolina, her southern charm shines through. I appreciated Britt’s giggle at the fact that Space Mountain still scares me (it’s a rollercoaster in the dark -- how is that not scary??) and her passion to help those in need.

During our chat, we discussed her role in White Rabbit, the transformation of her character, and what it was like to work with super-hunk George Clooney:

YH: White Rabbit is a rather dark film with a powerful message. What drew you to the script and to your character, Julie?

BR: When I first read the script, I thought it was such an interesting story. I was interested in exploring the character of Julie, especially in her arc. She starts off as this outrageous, outspoken girl who is going down the wrong path, then she makes the turn and decides that she wants something better for her life.

YH: The film is set in the south, and you yourself are from the Carolinas. Did you bring any of your experiences growing up in the south to Julie?

BR: Not necessarily with this project. The Southern lifestyle is really specific and elevated the story because the kind of people that live in this town and what that mindset does to people really drives my character to make a big change. But I don’t know that the Southern setting necessarily had anything to do with the choices that I made based around that.

YH: Julie undergoes quite a transformation in the film, particularly in the way that she looks. Did you work with the designers and makeup artists on the film to transform Julie's look, and if so, how did you come up with this particular transformation?

BR: I had some input on her transformation. I was given a very short window to do so. I was there for a week. It was a very limited time. I did know in the back of my head that I wanted it to be drastic and very obvious to the audience that she made this change. The biggest thing was she needed to be very simple by the end and she comes out a better person. She switched to solid, bright, really happy, cheerful, and simple clothing choices and hairstyle. 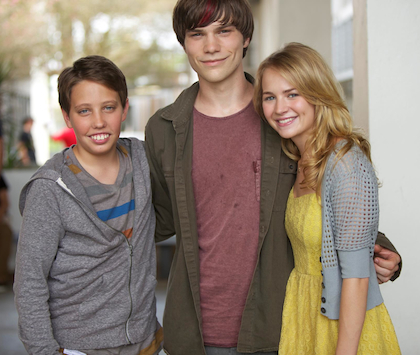 YH: White Rabbit clearly addresses the problems of bullying and violence in our schools. What advice would you give to those who are currently being bullied?

BR: It’s a really serious issue. I have a lot of younger brothers and sisters. It is a huge issue, and it can really shape the way these kids learn and develop respect for each other. I think the main thing if you are being bullied is to talk about it. Talk to your parents, talk to teachers and your friends. Try to reach out to people because the more people you have surrounding you and protecting you, the better off you are. Just get people on your team.

YH: You recently wrapped up Tomorrowland, which is based on the land at Disneyland. How much of the actual land makes its way into the film, and do you have a favorite attraction in the real Tomorrowland?

BR: It is loosely based on the idea of Tomororwland in the theme park. There is not a huge connection. I think when Brad [Bird] and Damon [Lindelof] came to Disney and pitched the idea around something in the theme parks, that’s what kickstarted the idea. We actually did shoot in both Disneyland in California and Disney World in Florida. I love Space Mountain. It’s fantastic.

BR: It sort of felt like the first acting experience ever. With Brad, he’s so specific and knows exactly what he wants. He has this movie he’s already planned in his head. Working with him was very technical. I had to learn a new way of taking direction and approaching ideas. It was really a new version of learning how to act and have this relationship with the director. It was a little intimidating working with George, I’m not going to lie, to be the new girl on set. But he was so warm, kind, and normal, eventually I felt comfortable and was able to work with the best of them. He was so generous and helped me along the way with any bumps or any issues I may have had. It was a wonderful experience, and I came out of it learning so much about filmmaking. I’m really grateful for it.

Be sure to see Britt in White Rabbit in theaters, VOD, and iTunes starting this Friday (February 13)! You can also keep up with her on Twitter at @RealBritt_Rob.