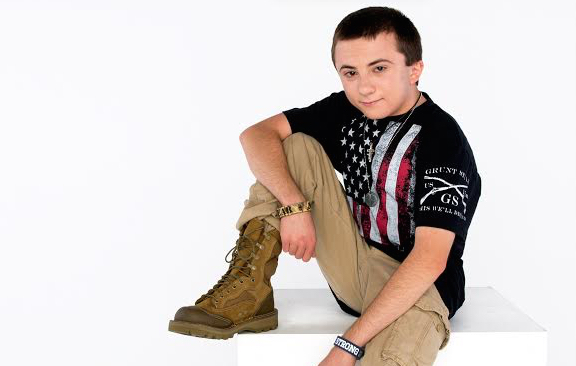 For the past 6 seasons, Atticus Shaffer has played everyone’s favorite little genius on the hit ABC sitcom, “The Middle” -- Brick, the youngest member of the quirky Heck family, and who may be their quirkiest member (in a family already filled to the gills with quirk). Despite this, he proves that it’s cool to be a nerd, and that no matter how weird others may perceive you, you should always just be yourself.

In addition to starring as Brick, Shaffer has been busy voicing numerous animated characters, including Peedee on Cartoon Network’s “Steven Universe” and Ono on Disney’s animated series, “The Lion Guard”. As if that’s not enough to keep him busy, Shaffer has recently joined forces with the Boot Campaign on their new project, the Patriot League, which helps to empower teachers to promote patriotism in their classrooms. Shaffer is the new celebrity spokesperson for the league, and he recently shot a PSA with combat-wounded Staff Sergeant Joey Jones:

During our chat, Shaffer filled me in on what Brick will be up to the new season on “The Middle”, how voicing an animated character is different from live acting, and who his favorite writers are:

YH: Can you tell us anything about what will happen to Brick in Season 7 of “The Middle”?

AS: This has been going on for a while now, Brick is obviously getting older. He’s growing, he’s becoming mature and becoming more aware in his thinking. He’s beginning to understand the importance of certain things and appreciating them more, but at the same time, we are still trying to keep him as classic Brick, which I think is perfect. I think Brick is cool, because he shows the love and enjoyment of being smart. He’s showing that it’s okay to be unique. Those are the attributes that I want to keep going with Brick. There are moments in each episode where you can tell that it’s still Brick, and that’s comforting for me.

This year specifically... they’re bringing over the girlfriend storyline he had with Cindy last year... so that’s a continuous event. It’s still just him interacting with the family, and what it’s like for him and the parents to be the only child in the Heck household. Sue and Axl are away at college, so we will really see how the Heck family works around those things.

YH: What inspired you to become the spokesperson for the Patriot League (in conjunction with the Boot Campaign)?

AS: I’m a very big -- for lack of a better word -- advocate for the military. I’m very patriotic. I have an immense appreciation for the military. I have an immense appreciation for these liberty and privileges that we have in our country that makes our country so unique. These veterans have given life and limb to protecting our country. With my condition [osteogenesis imperfecta, type IV], I can understand and can relate to a point too. I can relate to what it’s like to have a challenge or to be in pain, or what it’s like to have an obstacle you need to get over, and the fact that these servicemen and women in our military are completely fine with that and are willing to have that become a part of their lives, and have to go through pain for the betterment and protection of our country, I can appreciate them even more.

As for getting involved with the Patriot League specifically, I went to a boot camp photo shoot, and they asked me to be a part of it. I was more than happy to be a part of it. I thought it was so cool and admirable what these people are doing for our servicemen and women who are returning from duty. While I was there, I was talking with them and telling them the same thing I was telling you now, and how happy I was to be a part of this photo shoot, and they brought up that they were contemplating doing a patriot league program, and they explained how it is talking about patriotism in the classroom, what the true meaning of a patriot is, the freedoms that we have in this country that are nowhere else in the world... I was so intrigued by it. They asked if I wanted to be a part of it, and I said, "Absolutely, I would love to be a part of it." It kind of went from there. Since then, we’ve been finalizing everything, and we are launching the program for this school year. I’m really excited to see how things pan out.

YH: Will you personally get to work with students and schools as part of the campaign?

AS: I’m not sure if I will be able to talk to schools before the whole patriot league curriculum gets completed. But at the end of it all, one of the things students are going to be able to do is make and sell these freedom bracelets. They will be able to sell these freedom bracelets to their families and friends, kind of like a fundraiser. The funds from those bracelets are going to go to funds specifically set up by the boot campaign to help military veterans who are returning home. The schools that do the best and really use the curriculum inside their classrooms are going to be able to get visits from myself and Joey Jones, who is a marine veteran who is part of the boot campaign. The curriculum itself is a K-12 curriculum. 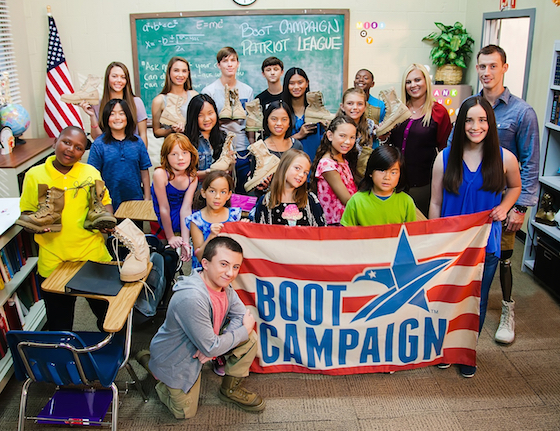 YH: Like Brick, you are an avid reader. Do you have a favorite author or series of books?

AS: This kind of all ties in with the patriot league and what have you -- I’m a huge fan of military history. I love learning about it. I love learning about the hidden things that people don’t normally read about, like different sections of WWII, where there were different battles and wars within the war, which were so unique and fascinating. But for, like, modern-day things, I have a few of Oliver North’s books, I think he’s an absolutely fantastic writer (speaking in real-world terms). I’m also a big fan of C.S. Lewis. There’s my namesake book of To Kill a Mockingbird, I love to read that book. I’m also into prepping and zombies, because I’m a huge zombie nerd; I do have fun reading books like How to Survive the Zombie Apocalypse. Something else that I’m really into, and that my mom got me into, is words of inspiration or poetry. One of my favorite poetic writers is Ralph Waldo Emerson. He is just amazing. It’s amazing to read his stuff and how it can apply to things back then and how they can be applied to everyday life. [Henry David] Thoreau is also plastered all over my fridge.

YH: Since you are quite familiar with the world of nerdom, if Brick was going to cosplay as someone, who do you think he would dress as and why?

AS: There have been a couple episodes where he has dressed up as Planet Nowhere characters, and he has been to little Planet Nowhere conventions and book signings, so he’s definitely in that realm of things. If Brick and I were to hang out in a room for a good couple of hours or so, we would probably talk about “The Walking Dead”. He would probably go to Comic-Con as a walker, a character from “The Walking Dead”, or, because I’m a Star Wars fan, he would probably cosplay as like a jawa or as a Yoda. He would probably be able to design a big old chair thing and sit in it and just walk around with the Yoda ears and what not.

YH: You were born with Osteogenesis Imperfecta type IV, a congenital condition which causes fragile bones. How has this affected you?

AS: That’s a very good question. For me, this is something I was born with. My mom has this as well, as well as my brother. There are different types within the line. When my mom was born, there were only two types. When my brother was born, it expanded, and then when I was born, it expanded even more, and now it has expanded to eight or nine different types. You can’t type someone who has a line, because literally every person is completely different. There’s so many different attributes with that type, that no doctor is able to say, “Oh, type III requires this type of treatment, you’ll be fine.” No, you have to look at that person and how they are behaving and how they are responding to different things. I am a type IV, which is told to me to be a more severe version than my mom’s type, which is type I. However, I am able to walk around and function. I’m mobile. I’m generally normal, except for a few things. But for some people who, say, have a type III, they are stuck in a wheelchair and sometimes they are not. Sometimes two people will look similar, however one is in a wheelchair and another is walking around and function fine. For me as a type IV, I look one way but I have seen other people who are in a much worse state than I am. It’s all based on how they get treatment and how they respond to that treatment.

One of the bigger things in my life that my mom has advocated for me is that she has never wanted me to feel like I’m different in a negative way. We’re all supposed to be different and unique. We’re all supposed to be our own person -- because how boring would the world would be if we were all the same? It wouldn’t be a life worth living if we were all the same. The things that make us unique are what make us special. They’re what make us who we are. My mom has always told me to be yourself. Be yourself. You are who you are, and be yourself. Yes, you have to do things differently, and you may have challenges and difficulties that you will have to get over. However, you are you, and you need to be who you are and let people appreciate you for who you are. She’s been a huge advocate for me, and she gave me the confidence to be who I am. However, getting into the acting business is a struggle. I am in a position where people may not hire me because of who I am, which is why I feel so blessed to be on the show that I am on. Everyone on “The Middle” has always said, “You know what, it’s fine.” They wanted me for who I am. They wanted me for what I could do. They weren’t going, “Oh, he’s a disabled person, we need to have him.” No, I wasn’t hired for that reason. I was hired because of what I can do as an actor.

You can keep up with Atticus on Twitter, and don't forget to tune in to the Season 7 premiere of "The Middle" TONIGHT on ABC!