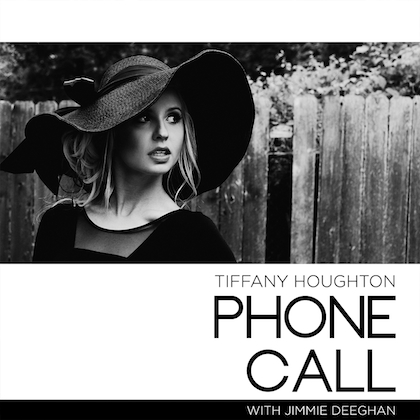 Singer/songwriter Tiffany Houghton recently released her second single and music video, entitled “Phone Call” (below), and is currently working on her EP. Originally from Dallas, TX, Tiffany first got her start on Broadway before going on to study music at the prestigious Booker T. Washington Arts High School. Over the past few years, she has opened for Jake Miller andJoe Nichols and has covered numerous songs, each slightly different from the original, on her website.

Tiffany is great fun to chat with. Her perky Southern personality shined through during our talk, and I felt as though I were talking to a close girlfriend. We discussed her latest music video, what it was like to study under the coach for the Dallas Cowboy cheerleaders, and why she loves the song “All I want for Christmas is You”:

YH: Tell us a bit about your new video, “Phone Call”.

TH: I wrote this song when I was dating somebody. We were on a date, and he left to talk to his ex-girlfriend on the phone. And this kept happening pretty frequently. It was pretty upsetting, because she was 1,600 miles away, yet he felt closer to her than me. I went through a lot during that time. I wrote this song with my friendJimmy Deeghan. We actually wrote this song while sitting on his front porch.

For the video, we kept some pieces from something that we had shot last year. We spliced in little parts of that into the video. I wanted the depiction to be very authentic to what really happened. The front porch that we are actually sitting on in the video is footage from last year when we wrote the song. It was cool.

YH: You have covered quite a few songs over the last few years. Is there a particular song that you enjoyed covering the most?

TH: My favorite one to cover was “Alone Together” by Fallout Boy.Pete Wentz ended up blogging my cover on his Tumblr, and I was totally crying in the middle of a Cracker Barrel on my way to Nashville to record some music [laughs]. I had to stop because I was so excited that he said he liked it. I also love that song. It was fun to rewrite some of the parts to make it a slower song.

YH: What was it like to perform on Broadway?

TH: It was a really interesting experience. I was really young, I was about 10. It was the first time my skin had to be really thickened. It was very rough. It was very intense. The director yelled a lot. But I had a lot of fun. I learned a lot and grew a lot from the experience. I learned a lot about entertainment at a really young age, which was good.

YH: What has been the most interesting thing that has happened to you while on tour?

TH: I was opening for a Jake Miller show (I wasn’t out on tour, I was just opening for him), and afterwards, all the girls came up to him and flocked him. It was so cute. Anytime something like that happens, it reassures me that this is what I want to do.

YH: You attended the prestigious Booker T. Washington Arts School. As someone who also went to Arts School, I knew the experience can be a bit unusual. Did you have any particularly unusual teachers, classes, or experiences?

TH: I was in the music cluster, but I took a dance class. I was withKaty Carter, who does some of the coaching for the Dallas Cowboys cheerleaders. She was so intense and critical; it was a lot of tough love. But I learned so much from her. It was so cool to see just how passionate she was. I really enjoyed the time I had with her. It was a lot of jazz and contemporary dance.

YH: Who are some of your favorite musicians?

TH: Ever since this new One Direction album came out, it’s been on repeat. I cannot get over how good it is. I love it. I’m a huge fan of them. Some of my big inspirations are Katy Perry, Taylor Swift, Sara Bareilles, and Shania Twain. I look up to them because they’re all songwriters themselves. I feel like their careers reflect someone who is an artist all the way around, not just someone who gets in the booth and sings what they’re told to sing. They really care about who they are and the songs they are portraying.

TH: Something that’s awesome that I’ve done for the last two years is, when I was living in Nashville, I would log into my Facebook, Tumblr, Instagram, Twitter, etc., and I would devote 2 to 4 hours a day talking to my fans using webcasts, commenting on things, etc. I just put in the time everyday. In addition, if you are looking to have a teen fan base, the best time to be online is around 3 or 4 o’clock, because that’s when everyone is getting out of school. I will get online around that time and talk to my fans. It’s incredible how your fan base really will grow. It’s little things over time that consistently help a lot.

YH: The holidays are upon us! Do you have a favorite holiday jingle?

TH: “All I want for Chirstmas is You” by Mariah Carey is just undeniable. You can’t help but be in the best mood and have a huge smile on your face when it comes on. That’s my favorite. I love that song!