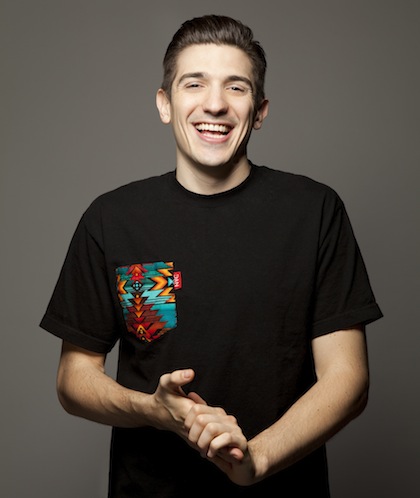 Andrew Schulz currently acts as host on MTV’s new show “The Hook Up”, which features one “single” and four “daters” who attempt to explain to the single why she should pick them. They all sound great… until native New Yorker Andrew unearths secret photos and habits of each one. Andrew will also star on two additional MTV shows: “Guy Court”, which follows Andrew and company from “Guy Code” who prosecute (or defend) a guy by the official laws of Manhood; and “Jobs that Don’t Suck”, which features workers who have found some of the coolest jobs in the world such as snake milker, airplane re-possessor, and super car test driver. “Jobs that Don’t Suck” will premiere early in 2014.

I was amazed at how quickly Andrew picked up on my faint Australian accent, and charmed by how much he laughs in real-life. He’s got quite strong opinions on the world of dating and encourages guys to just tell a girl that they like her (hear that guys?). He is just as fun in real life as he is in his stand-up.

During our chat, we discussed exactly what a snake milker is, the craziest thing seen on “The Hook Up”, and where to get the best pizza in NYC:

YH: Tell us a bit about your show new show, “The Hook Up.”

AS: It’s a modern dating show. We show people who they really are before you date them. I dig up dirt on their social media profiles, and we get them to admit a lot of secretive, embarrassing information. Like if you have any habits that you don’t tell people, such as picking your nose, we get them to admit it. The single picks one of these four people based on the information given about them. You know what you’re getting into. Unlike most dating shows, where they say the guy is great, he has a great job, he’s charming, etc, and then all the sudden you date them and they’re a d***head. [chuckles] In this show, we let you know if they’re a d***head beforehand, so you don’t have to waste your time!

In the first act of the show, we let the daters say how great they are. They say, “I love surfing, I love charity, etc.” Then in the second act, we dig up a picture of them on a stripper pole getting champagne pored over them. It’s great!

On the show, the most physically crazy thing I’ve seen was this guy who did tequila shots. He snorted the salt, took the shot, and squeezed the lime in his eyes. It was some crazy frat thing, or something. We’ve seen videos of people dressed up as pirates, and sincerely mean that they are pirates in their alter egos. I’m not sure you would want a girl to see that. [laughs]

YH: In the show “Jobs that Don’t Suck”, you’ve gotten to experience some of the world’s best jobs. Which job was the best job to do (in your opinion)?

AS: The coolest job I got to do in the show was the snake milker. He extracts venom from poisonous snakes to make anti-venom. It was this guy whose dream was be to around snakes. He was a pilot, making tons of money, and he slowly built up this serpentarium (a snake zoo) to the point where he could make a living at it. He quit being a pilot and went full-time. He’s been hospitalized five times. It’s just crazy. I got to be there with the most poisonous snakes. There was nothing stopping them from biting me. It really is living. I actually have a huge fear of snakes. It took a lot of me to get in there.

AS: Every code applies to different people’s lives. It’s really just a handbook, and you use the stuff that you think applies to you. For me, a code might be “your jeans should never be skinnier than your girlfriend’s.” That’s something I’d want to live by, I wouldn’t want to be walking down the street wearing some pants that look like they were painted on me. I don’t want to look like the girl in the relationship. Somebody else might really respect the buffer zone. Take it and apply it to your life.

YH: Who are some of your favorite comedians?

AS: My favorite comedian of all time is Patrice O’Neal. I thought he was incredible. He’s the guy (that when I’m doing comedy) I measure myself against. I ask myself how he would feel about certain bits. Would he think they’re too easy? He’s the person I judge myself against. Growing up, I was a huge fan of Eddie Murphy. He was the first person I ever listened to do comedy on a cassette tape with my father. The way that my dad laughed at Eddie Murphy is probably the reason why I do stand-up comedy. I probably, on some level, wanted to make my dad laugh like that. I was a big fan of Bernie Mac, Chris Rock... I love the way that he takes the hard way. Those were the people, growing up, who I gravitated towards.

Today, it’s such a random collection of people. I like this guy named Nick Griffin. I like Bill Burr. I like people who have strong personas. There’s something special about that. I like guys who are just talking to you. I like to be very conversational in my comedy. I like making people laugh first, and then react later. The best performance for me is if the audience doesn’t know if I made it up all right then or if I had written it before.

YH: You have mentioned that growing up in Manhattan has helped influence your comedy. What do you think, by far, the strangest thing about New York City is?

AS: I didn’t realize that about my comedy until I left NYC. I didn’t realize how weird you are being from NYC. We’re just weird people. I didn’t get my license until I was 21 years old. A lot of people here don’t know how to swim. I have no experience with animals. I’m fascinated with my girlfriend’s backyard. I love it. That's the first time in my life I’ve had privacy outdoors. In NYC, it is literally impossible to have privacy outdoors. In a backyard that’s covered with trees, you can be outside buck-naked and no one can see you. It’s beautiful! That’s so liberating. I love feeling that. I like being the fish out of the water and finding myself in these situations where I learn a lot about who I am.

YH: As a proud New Yorker, be honest: Where can we find the best slice of pizza in the city?

AS: That’s a really great question. I love that question. Okay, I love Lombardi’s. It’s incredible. It’s one of the original brick ovens, which are now illegal in New York City. There’s also Gromaldi’s, which is right under the Brooklyn Bridge. That’s also very good. I love John’s. John’s is amazing. It’s right off of 6th Avenue in the West Village. It’s great for a slice. Another great slice of pizza that’s a little bit more decadent is Artichoke. It’s very popular. It’s big, hefty, dense slice of pizza. I take pizza very seriously, as you can see. [laughs]

"The Hook Up" airs weekdays on MTV (check your local listings). You can follow Andrew on Twitter @andrewschulz!