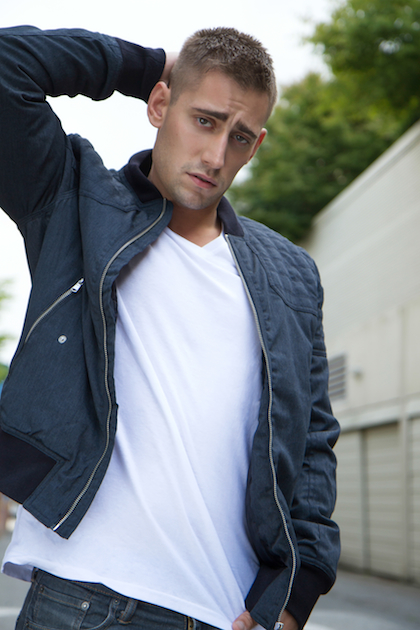 British actorMichael Socha currently stars as the wisecracking Knave of Hearts on ABC’s “Once Upon a Time in Wonderland”. The show, a spin-off of the massively successful "Once Upon a Time", follows Alice (Sophie Lowe) as she and the Knave (AKA Will Scarlet) search for her long lost love in Wonderland. The show delves into the character’s own intriguing past, and thus far we have learned that the Knave is quite a clever thief and had a love named Anastasia, who has once again come back into his life -- but not necessarily for the better.

Born and raised in Derby, England, Socha first began acting at 11 years old when he tried out for the musical Bugsy Malone and landed the lead role. He went on to study his craft at the age of 14 when he enrolled in film director Ian Smith’s Central Television Junior Workshop. When he was 19, he signed with his first agent and held a variety of odd jobs, including working at a manufacturing company and a car wash while he went out for auditions. His hard work paid off, and he went on to gain recognition for his work in the films This is England andSummer, where he starred alongside fellow “Once Upon a Time” actor Robert Carlyle. He is quite well-known for his role as werewolf Tom McNair in the British show “Being Human”.

In real life, Socha is great fun to chat with. He has a wicked sense of humor and a very charming accent. I felt as though I were chatting with an old friend as opposed to an artist I had just met. I predict that Socha’s role as the Knave of Hearts will be the first of many for Socha as he breaks into America.

During our chat, Socha told me what it’s like to play the Knave of Hearts, why he supports his favorite soccer team Derby County, and why the Tango Man should appear on “Once Upon a Time in Wonderland”:

YH: You have played a war veteran struggling to assimilate back into the world, a young werewolf learning to hunt, and now a Knave of Hearts. What has been your favorite role to play thus far?

MS: That’s a hard question, Sarah. The Knave of Hearts is a brilliant character. I really enjoy playing this character. I’ve been enjoying the clothes he wears. After that, I would say the werewolf was a good challenge. He wasn’t me. He was so far away from who I am. He was a real challenge. I would probably say Tom was my favorite, closely followed by the Knave of Hearts.

YH: Did you study any of the other versions of the Knave of Hearts prior to playing this one?

MS: With the Knave of Hearts, I watched the Johnny Depp one,Alice in Wonderland, and read a little bit about his character in the actual book, Alice in Wonderland. Sophie Lowe, who is playing Alice, has already got a little bit of history. Naveen Andrews, who plays Jafar, also hasAladdin to reference. I think I’m a bit lucky because I get to make my own version of him. He hasn’t really been invaded yet. [chuckles] I’m lucky. I get to create my own version of him. It’s amazing.

YH: You have gained quite the following thanks to “Being Human” and now “Once Upon a Time in Wonderland.” Have you had any interesting fan interactions?

MS: Not compared to Miley Cyrus. [laughs] Oh Miley... I’ve met a few diehard fans. But none too kooky I can think of. I’ve met some really passionate, loyal fans who have come to set, and it was great to get to know them on a personal basis. They’re quite brilliant. They’re very good fans. They’re lovely. I’m lucky in that respect. They are very positive.

YH: What do you enjoy most about your career as an actor?
MS: I suppose it’s quite generic to say the acting bit. In a whole day of work, there’s a small part of the day where I actually act. A lot of times during the day, I’m just waiting around. With the Knave of Hearts, I can’t just switch into him. The other day, I had a real emotional scene... They gave me about 20 seconds just to get myself ready before they started rolling.

YH: Do you have any theories on how well your team Derby County will do this season?

MS: Not very well. We never do. We’ve got a new manager in, who’s brilliant, but I still don’t think we’ll do very well. Every time I watch a match, I call it "character building". You can’t always get what you want. They were alright in the '90s when I was a lad. They were quite brilliant, actually. Well, maybe not brilliant, exactly.

YH: If you could have any character show up in Wonderland (from “Once Upon a Time” or any fairytale), who would you pick and why?

MS: That’s a good question… I’m a big fan of Robert Carlisle. He’s a lovely bloke. I think, on a personal level, I would like to see him pop up in Wonderland as Rumplestilskin. It’d be fun to have Bobby around. In terms of an actual character from a fairytale, I think we’ve gotten pretty much everyone covered. There’s an old advertising company in England called Tango, which is like an orange Fanta. There’s a man called Tango Man, who was covered in orange who would surprise people who were drinking Tango. They’d turn around, and he’d be right by their shoulder. I think he would make a great fairytale character. The Tango Man needs to show up. You won’t find him in America, because Tango doesn’t exist there. I think he would fit in well in Wonderland. I could see him working with the caterpillar or being one of the Knave’s allies. You have to look him up. I’m going to put this on Twitter right now. #TangoMan.

[I felt the need to share the Tango Man with all of you, as a thousand words could not quite describe him:]

Catch Michael in "Once Upon a Time in Wonderland" every Thursday night at 8pm on ABC!