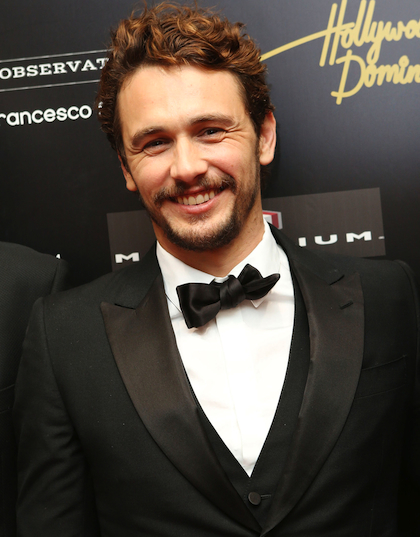 Nearly a month has gone by since the talented James Francoreached out over crowdsourcing to raise funds and awareness for "Palo Alto Stories" and his beloved charity, Art of Elysium.

Now, with only a few days left in the campaign, we touched base with James and his directors Gabrielle Demeestere (Yosemite), Nina Ljeti (Memoria), and Vladimir de Fontenay (Memoria), to talk more about the films, the charity, and the inspiration behind it all.

JF: It uses other stories from the collection.

YH: What are your thoughts on crowdfunding?

JF: It’s an effective, independent way to get interesting projects made. But to be clear, I am not asking for money for myself; these are projects that young filmmakers will direct, NOT ME. And no money will be made off of these films. ALL sales of these films, from dollar one, will go to charity.

YH: Out of all the charities you could connect yourself to, why The Art of Elysium?

JF: It’s a very pure group that gives nothing but love to its recipients. I love working with children, and these are children who need as much love as possible.

YH: You are an actor, but you have always been involved in so much more, such as art, writing columns for publications, novels, and academics. If you could only choose to do one of your talents for the rest of your life, which one would it be and why?

JF: I dunno, I like the variety. But I guess directing, or writing.

YH: The directors putting these features together are former students of yours. Tell us more about them and why you picked this particular group of talent.

JF: They are some of the most talented young directors I know, and they have the right sensibility for these projects. I asked them to do this because I knew they would make the best films based on this material.

YH: Any other projects or films you are currently working on that you would like to share with us?

YH: How does it feel to get this opportunity to create such a project?
GD: It feels like an amazing opportunity, especially because it's so hard these days to find financing for a first feature film. I also feel especially lucky because I love how cinematic the characters and mood in James's stories are, and I loved the process of adapting them.

VDF: It's great! The energy is unique, and we're all in this together because we like the book, what we want to do with it, and ultimately we all really enjoy working with each other.

YH: Do you feel the world is watching you, judging you, waiting to critique the end result? If so, how are you handling all the current press?

GD: Just excited, because the more press there is, the more people will know about the Indiegogo campaign, and the better our chances will be to make the films we are hoping to make.

NL: I don't really pay attention to it. I'm just doing my thing.

VDF: Not at all. I think people are interested in the films. People are curious about how to find new ways to finance films, and it gets a lot of attention for this reason. I don't know anyone who tried to finance three features in 30 days on the internet before!

YH: Each film/story is unique. What drew each of you to the films/stories you picked for screen adaptation?

GD: The stories James asked me to adapt were three stories about childhood, called "Yosemite", "Peter Parker", and "Grand Illusion." He had seen some short films I made at NYU, and I think he thought I would understand the mood of these stories about growing up. We're the same age and, though I grew up in France, I spent summers with my mom's family in the Bay area, so I felt really connected to the time and place (the 1980s) the stories take place in.

NL: I liked the stories that Memoria is based on because the kids remind me of the kids I grew up with. It was easy for us to adapt the story because it’s based on friends and acquaintances and situations we had growing up.

VDF: I read Palo Alto two years ago and loved the world and the tone of the book. The three short stories that Memoria is adapted from are centered around young boys at the frontier of self-exploration and self-destruction and I could really relate to that particular aspect of the book.

YH: What was it like being taught/working with James?

GD: James and I were classmates in the grad filmmaking program at NYU. We crewed on a number of films together at NYU and always laughed really hard. Later, when James produced the film Tar, he invited me and a number of other NYU students to make a series of short films based on CK Williams's collection of poems. It was an amazing experience, because I had never had access to a professional cast or crew, and I learned a ton on that set and formed long lasting bonds with the other filmmakers. I'm grateful to James for giving me the opportunity to grow as a filmmaker, and also for always choosing literary material that is inspiring to work with.

NL: I'm very Lucky to be working with James. He's an open, honest individual who is always supportive in every project I work on, and who is always willing to help. I'm really glad he is giving Vlad and I this opportunity.

VDF: James is passionate and generous. Filmmaking is a real collaborative process with him, and it's all about taking risks and trying things. It's just really inspiring.

To help support the cause, please visit their Indiegogo page, and remember, all proceeds from the films will go to Art of Elysium. But hurry, the campaign ends July 17!