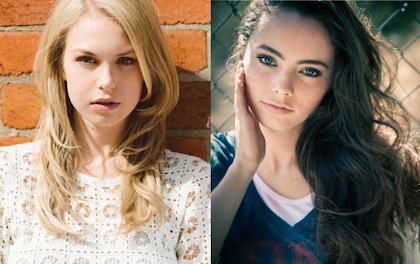 Penelope Mitchell and Freya Tingley are two of the lead actresses in Eli Roth’s latest horror series, “Hemlock Grove”. Currently available on Netflix, “Hemlock Grove” (based on the novel by Brian McGreevey) is a murder mystery set in the gritty Pennsylvania steel town. When the body of a young girl surfaces, the town is quickly swept up to figure out who done it. The mystery becomes even more confusing once you realize many of the characters possess supernatural traits...

Penelope Mitchell stars as Letha, the morally righteous cousin of Roman (Bill Skargard) who could be one of the suspects and eventually sets out with Peter (Landon Liboiron), a gypsy kid, to track down the killer. Meanwhile, Freya Tingley plays Christina, a friendly novelist who suspects that Peter could be the killer. I’m not going to reveal who actually committed the heinous crime, so you’ll have to watch the show to find out!

Penelope and Freya both hail from Australia and have been busy not only working on “Hemlock Grove” but on many additional projects. In this interview, Penelope dishes on what it was like to work with Eli Roth, her favorite horror film, and her adventure to an abandoned church on set, while Freya reveals the details about the film she’s currently shooting in London, what it’s like to learn sign language, and why she isn’t a budding novelist like her character:

YH: What was it like to work with Eli Roth, who directed the first episode of “Hemlock Grove"?

PM: It was really great. I was a fan of his other work. I’m a bit of a genre nerd when I’m not being a serious actor [laughs]. But he’s great to work with. He has wonderful energy, he’s very collaborative, all ready to bounce ideas off of you. Working with him a was real buzz, actually. He really set the tone for the rest of the season. I spent most of my time with him, talking about the series, discussing ideas. I learned so much from him; it was really great.

YH: Do you have a favorite horror movie or book?

PM: I really loved the Evil Dead movies growing up. I was a big fan of those. And Bruce Campbell! They’re just really funny. They’re  absolutely classic. I haven’t actually seen the new one. That’s one thing I’ve been meaning to!

YH: Your cousin, Radha Mitchell, has also been in quite a few horror films. Did she inspire you to go into acting? Is being in horror films a bit of a family tradition?

PM: Not really, in terms of being in horror films. I think that you need to be intelligent, and to be able to appreciate certain nuances in them. They are a particular type of genre. I think that she and I are similar in that respect. She’s super bright and has an amazing sense of humor. In terms of acting, she was a huge inspiration to me growing up. She was very strict with me, though, and made sure I got my university degree and had a bunch of other assets before I even contemplated coming to Hollywood. I’m really lucky to have her as a role model, and to have someone to bounce ideas off.

YH: You’re originally from Melbourne, Australia. How is it for you to live in the States now? Is there anything you miss in particular about Australia?

PM: I was here for a couple of months before landing the role in “Hemlock Grove", which was filmed in Canada. Canada is very similar to Australia. I think it has a bit to do with the Colonial history. I’ve been back here for about four months now, and it’s been a strong commitment for me. I’m throwing all my eggs in the basket. I think L.A. is a really fun city. I’m actually a really hard worker -- I can study for weeks on end, work for weeks on end. I have an amazing group of friends here in L.A. So when I’m getting anxious about something like traffic, or the pace of the city, I’m really lucky to have a group of friends I can just go hang out with and be normal. I think that’s the most invaluable thing you can have in a city like this.

YH: Tell us a bit about your character Letha, and her rather complicated relationship with Roman.

PM: It’s a tricky one. It’s a hard one to comment, because it is what it is. When you’re a teenager, emotions are complicated and they’re not clearly defined. I think the thing about Letha and Roman is that they’re both members of a ghostly family, so they’re public figures, which comes with a lot of responsibility. Moralistically, they have to be role models. Letha has a very strong social conscience. But at the same time, they’re both revered by the community, but they’re also kind of loathed and ostracized. When you have so much pressure on you, it can be a lonely place. I think that’s what they kind of find in each other. They have this loneliness in common. I think that Roman is a very interesting character as well because he is Letha’s polar opposite. He’s to the yin to her yang. He’s very fiery. He represents a part of herself that she’s never explored. He fascinates her. What’s funny is that Bill and I just sort of went with it, we never really discussed it.

YH: Did anything particularly scary happen to you when you were on set?

PM: We were there for Halloween and we all dressed up, which was fun. But I think because the show was so horrific, everything else by comparison was kind of lame. There was one chapel that was apparently haunted, a lot of strange things that happened there. I decided to go check it out, and it was in an abandoned area that hadn’t really been touched in about 15 years. It was a little crazy because there were still these Sunday school illustrations and this Christian darkness scrawled on the walls. The wind was howling when I went, and that was the eeriest experience I had. And that was pretty lame, actually [laughs]. I don’t scare easily, I have two big brothers, and I think they pulled every prank that could have been pulled on a child on me.

PM: I shot an independent film, The Curse of Downers Grove. The storyline is very different from “Hemlock Grove”. My character is very bold, she’s a very different character. I think it will come out later this year. At the moment, I’m talking about a lot of things. I’m at a wonderful point in my career where I can work out what I want out of my career. I can expand myself creatively. So I would say, watch this film! It’s interesting because the film deals with the teenage psyche and American religion, which is very fascinating for me, coming from Australia. Australia is pretty liberal, so the whole idea of abstinence was something that I found very fascinating. And the drug culture that’s in a lot of these out-of-bounds suburban areas. It’s really about the youth culture and what’s going on at the moment. It was really fun and interesting, which, as an actor, it’s always good to be learning something.

YH: Tell us a bit more about your character, Christina Wendell.

FT: She's a little bit of a book worm.

YH: Do you also enjoy reading/writing?

FT: Christina is an inquisitive girl that wants to experience as much of life as possible, so she can use this in her writing. She has a lot of repressed sexual feelings which causes her to be deeply troubled. Christina's entire psyche revolves around her aspiration to someday be a novelist, which I have no interest in becoming. I prefer to read young adult novels... the very books Christina expresses a clear disdain for. I also prefer painting to writing.

YH: You are currently filming Swelter in London. Could you tell us a bit more about that project?

FT: Swelter is about a group of men who rob a casino for 10 million dollars, and all except for one end up in prison. When the men are released 10 years later, they go looking for the one guy who escaped, figuring that he has the $10 million. This film has a whole lot of action, guns, and explosions, and great actors like Alfred Molina and Catalina Sandino Moreno. It's really going to be awesome!

FT: I didn't really think about the iconoclastic element to Wendy, and on reflection, I'm glad I didn't, because that could have put a lot more stress on me! I just wanted to make sure that I brought Wendy to life and encompassed every aspect of her character in the context of "Once Upon a Time". It's such a great show to work on, and I love the way that it takes the classic fairytale characters and brings them into a fantastical world with new subplots and storylines!

YH: You're originally from Perth. What was it like to come from the smaller community of Perth to Los Angeles?

FT: Perth is a great city to be brought up in, especially considering its laidback lifestyle and friendly nature, but I made the move to Los Angeles because it’s the place to be for actors.

YH: In the short film, "Beneath the Waves", you had to learn sign language. How difficult was it to master sign language (and do you have any tips for those of us who are interested in learning)?

FT: Sign language is a lot like baby language! It doesn't have the 'ands' and 'buts' and 'ifs' which makes it a lot simpler and easier to learn.

YH: Do you have a favorite horror film/book?

FT: The first movie which really scared me was The Ring! I loved horror films when I was a little girl, but now my 19-year-old self can't handle horror like I could then!