Q&A: Daytime Diva Wendy Williams Opens Up About Her Humble Rise to the Top 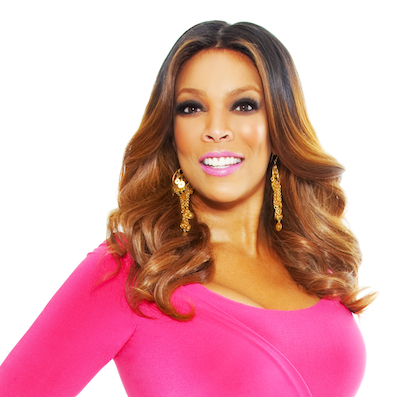 Wendy Williams is one of today’s most popular television personalities thanks to her hit syndicated daytime talk show "The Wendy Williams Show". Wendy is one of the most successful radio disc jockeys in American history with a career spanning over twenty years and an induction into the National Radio Hall of Fame in 2009. In 2012, the Hollywood Reporter named Wendy one of the most powerful people in media. She’s also a New York Times best-selling author, a jewelry designer for her Adorn collection on QVC, and she recently partnered with the legendary Suzanne de Passe to develop projects for TV and film targeting a diverse audience under the “Wendy Williams Presents” banner. I sat down with Wendy Williams in her dressing room after a taping of her live show where she opens up about her 4th season, what she appreciates most about her career, and much more!

YH: How does it feel having a new studio after being in the West 50s in a smaller space? It feels fresher, it feels more grown up, you can see the evolution of Wendy Williams The Talk Show Host with this new set.

WW: I won’t say anything horrible about that studio, because that’s the same studio that housed Montel Williams for 17 years. However, the evolution of television is what made us upgrade. People have HD now; not all shows are HD, surprisingly enough. For people of a particular generation, it didn’t bother me one way or the other. I don’t know what’s HD and what’s not on our TV at home. That’s just the way I feel. But for a new generation, including our 12-year-old son, he’s like, “Mom, you’re not in HD, really?”

It feels good because it shows the belief our partners at Debmar Mercury have in us. The studio audience holds about 25 more people. The kind of aisle space we have now is better. If you’ve been to the show before, you know during our Ask Wendy segments, I was standing with my butt held in, my breasts held down, saying pardon to everyone because my butt was in their face [laughs].

And the staging area on TV, it doesn’t look like I’m sitting there alone in a hot topics chair. We have about 50 feet more space going width way. Now we can do bigger things, without having to go to commercial break, have the crew set up and come back because, for example, Ke$ha is going to perform. It’s just better, everybody’s got bigger and better areas. My shoes and dresses were taking over my office. I didn’t really mind the old space, just being on TV with a successful show means everything.

We could have stayed in that old building, as far I’m concerned, until forever, and we would have made it work, because we're happy doing what we do, and when I say “we”, I mean the collective, the show's staff. They’ve all worked on shows before, shows that have gotten cancelled after one year, shows that have gotten cancelled after ten years, but the point is that this doesn’t last forever.

YH: How did the elements of working in radio help you with live TV?

WW: It helped a lot and hindered very little. Radio was four hours to make a point; I am a storyteller and I can be long-winded. TV, you have 7 minutes to talk to Fran Drescher. So, it’s 7 minutes and you have to be quicker. I count on my producers to produce the segments. Most of the time I know so much about the guests that are coming on because I do my research, plus they do their research. plus I’m a pop culture fanatic. For people who think I’m new to this. they don’t realize I’ve been doing this all along. I count on my producers to produce the best questions and move me along because they know I’m going to interject with my own questions.

And then the other thing is. obviously. getting ready. I wouldn’t go to radio looking like a slob. but I certainly didn’t come in for hair and make-up everyday. In radio, you can go in and look crappy, or you can pull yourself together. Here in New York, where everything is more glamorous, whether you’re a cab driver, a radio personality, a trash man, a sales person at SAKS, everything is more glamorous, and you never know when your phone is going to ring and after work you’re going to have to go for lunch, cocktails or whatever... But now I have people pulling me together, and I miss my do-it-yourself.

YH: What do you appreciate most about this journey that you are on?

WW: What I appreciate most is that I did not waste my dream and I did not waste my parents' college tuition. Honest to God, I know it sounds corny. But I didn’t just fall into this. I dreamt of being a showgirl in a different kind of way. I wanted to be a newscaster or a radio personality. Back in my day, there was no such thing as dreaming to be a talk show host, because who dreams that? Now, kids dream of everything, but back in my day, you don’t dream of being a talk show host and you barely dreamt of being a disc jockey.

Ever since I was in 6th grade, that’s when my older sister Wanda left for college, and the Barron’s Guide was how we looked for colleges back then, not online, and one of them I kept secretly in my room. So, while she’s looking for colleges, I’m also looking for a way out. I loved where I grew up, and I loved my parents but I was one of those types of girls… [pause] There’s got to be a better life for me around the corner, like, are you kidding me? I’m big, I’m tall, I’m fat, I’m black in a town with all white people around except for three others that look like me. So, I saw all these little nuances about life around me, and I just thought, "I got to get out of here." And my escape is to go to college, a 4-year college, far away. Not Fordham or NYU -- it’s too close, my parents will be there. I didn’t come from money; it was a big deal for my parents to pay for college. I didn’t get a scholarship, and I don’t have a dowry or an inheritance, so what I appreciate is I didn’t waste my dream and fantasy, and I didn’t waste their money.

YH: I’ve always felt that your hot topics segment is where you really thrive, and now its expanded into a 20-minute segment everyday.

YH:If you could talk to yourself 30 years ago, what advice would you give yourself on your journey?

WW: If I could talk to my younger self, I would say very simply, "Ya know… hang in there, it's going to be okay." I’m not a bragger, but I will tell you right now, I think I did all the right things to get to where I am right now. Nobody is going to say that I was the life of the party or the A-list with any crowd -- as of matter of fact, my Friday nights were spent at home watching "Dynasty" and "Dallas" and things like that.

I took my lumps when I was a kid. I didn’t force myself or alter myself to be part of a particular crowd. Instead, I was home, and my mother, who is very social, used to say, “Oh you have no friends,” it was sad at the time, but it was fine with me. I spent my Friday nights with my Barron’s Guide, and I knew that, when I went to college, I was going to reinvent myself. I’ve always been pretty much of a loner due to my circumstances and due to my unwillingness to walk the line that other people wanted me to walk. And I don’t mean I was being belligerent and shaving my head like Avril Lavigne and being crazy. There were a lot of years alone, I can’t say lonely because, I enjoy my own company, and I’ve learned to be my own best friend, and that happened many, many years ago.

My first job out of college was in the Virgin Islands; all of my friends were working at Macy’s because they couldn’t get a job as an engineer, or they couldn’t decide if they wanted to take their criminal justice degree and go to law school, so they are going to take a year off and sell State Farm Insurance or something like that. Me? I got my own radio job. My parents didn’t understand what I was doing, my friends thought, "Oh yeah, so, around spring break, we can come down and visit you!" And I’m like, "No, I’m really working, I’m making no money, and I’m working 7 days a week, and I don’t have money to party. Like I don’t even want to establish myself on the island, I am here to work, fly under the radar, get a job off the island, and go on."

The grinding years were really something special. There was a point in my career where I was working in D.C., doing afternoons and doing weekends in New York on the radio, and instead of getting off the highway exit in New Jersey at my parents house to sleep and get a hot meal and a good hug, I would sleep in rest stops with a blanket and a pillow. I didn’t want to hear their naysaying; they didn’t understand my journey. I’m from Jersey and New York, I have friends everywhere, everybody wants to hang out... I can’t hang out, I’m driving, I’m working in two cities. I forewent everything. I would eat rest stop food, and I had an alarm clock in my trunk, a blanket in my trunk, pillow and baby shades. I would wake up literally to the sound of a little man sweeping cigarette butts and garbage, and that to me was more peaceful than dealing with my flighty friends... But who at 21 isn’t flighty? I was the abnormal one. But maybe that’s why I’m the one who got the talk show, and they’re still selling State Farm Insurance, albeit higher positions. A lot of people’s dreams don’t come true just because you want it; you’ve got to put in the work.

YH:What advice would you give to young people looking to make it in their career endeavors? People see all the glitz and glam, the final product, but they don’t see the hard grinding hours behind it, because you’ve always been a hard worker.

WW: The advice I would give to young people is, all dreams don’t come true, but in order to put the wheels in motion, you’ve got to give up half of what you’re enjoying right now… half… at least. Young people these days have a hard way to go.

YH: Tell me a little about your new Friday roundtable segment.

WW: It will be bloggers, tastemakers, people like Elvis Duran, radio people, and maybe an expert. If we're going to talk about plastic surgery and Hollywood and analyze pictures of Hollywood actors and actresses who use Botox, I would like a dermatologist there. The round table is an extension of hot topics, and we're dissecting each topic with more people doing the talking from various angles.

Can’t get enough of Wendy and hot topics like us? Visit her official website for backstage access, her daily after-show, and to find out where to catch "The Wendy Williams Show" in your area. You can also follow the Queen of All Media herself on Twitter @WendyWilliams!