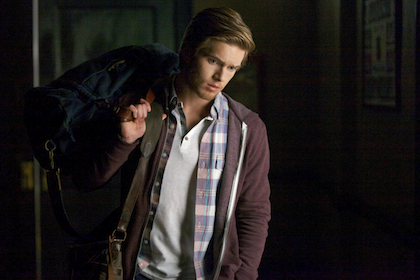 Chris Brochu stars as the elusive witch Luke on "The Vampire Diaries", a new buddy of Elena’s (Nina Dobrev) and brother to fellow witch Liv (Penelope Mitchell). Liv and Luke are on a solid mission to stop the Travelers -- although their plans may not go so smoothly. In addition to his stint on "TVD", Brochu will also star in two feature films set to be released later this year, Dawn Patrol and High School Exorcism. And if that’s not enough to impress you, he is also a rising singer and songwriter!

Brochu filled me in on Luke’s mission, his siblings, and what it takes to play a surfer on film:

YH: Tell us a bit about your character Luke on "The Vampire Diaries".

CB: Well, first and foremost, Luke is Liv's twin brother. She’s his family and means the world to him. Their mission is to keep the dopplegangers out of the hands of the Travelers at any and all costs.

YH: Luke is a bit on the mysterious side. In fact, it seems that he has a bit of a "secret agenda". Can you give us any hints about this, or we will just have to wait and see?

CB: Luke’s mission is pretty straightforward. He needs to stop the Travelers. However, plans always seem to come standard with complications. Liv and Luke are simply trying to remain true to their mission and, at the same time, adapt to their changing circumstances.

YH: In addition to "The Vampire Diaries", you are going to be in two films this year, High School Exorcism and Dawn Patrol. Can you tell us a bit about those two films?

CB: Dawn Patrol was a film I shot last summer alongside Rita Wilson, Jeff Fahey, and Scott Eastwood. It's a film based in a surf community and deals with love, loss, and revenge. It's a gritty film that really makes you reflect on the definition of "family" and the consequences of your actions.

High School Exorcism was a film I got to shoot with some really good friends of mine, Janel Parish, Jen Stone, and Shanley Caswell. The film centers around a girl who is possessed and the friends that try to help her.

YH: You seem to have a knack for playing surfers. You were in Soul Surfer and now you play a surfer in Dawn Patrol. Were you a surfer prior to these roles, and, if not, how hard was it for you to learn how?

CB: Thankfully, I had surfed before, but I'm certainly no professional. Timmy Hamilton, who I play in Soul Surfer, is a body boarder. That sport has its own unique form and technique that Timmy helped me with on the days we weren’t shooting. In Dawn Patrol, I play a pro surfer, and while I do surf, I did have a stunt double.

YH: Both of your siblings are also actors. Do you three ever experience any actor-related sibling rivalry, and would you ever want to act alongside your siblings?

CB: We have never experienced that sibling rivalry. My sister Kate’s passion is what got us into this business, so any success I have is attributed to her initial love for theater and singing. She's an amazing performer. As for Doug, I’m always happy for his success and always enjoy watching him perform. He deserves all the success he has had, as he’s extremely talented and a dedicated, humble human being. Basically, anytime one of us is working, we all are in a way, and I would love to act alongside Kate and Doug at some point.

YH: You are also a singer and a songwriter. Are you currently working on any new music?

CB: I'm so very glad you asked. Yes! I'm recording my first album now. If all goes according to plan, my tunes shall be released this year!