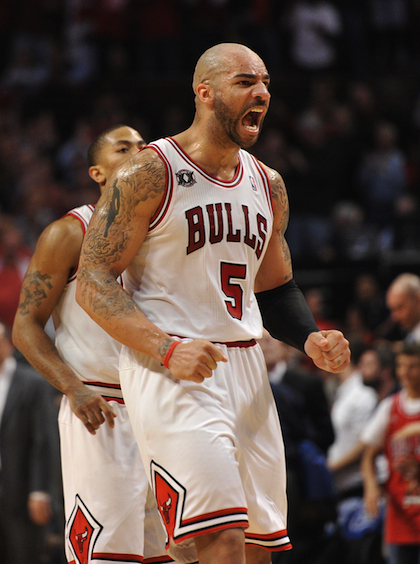 Maintaining a healthy lifestyle isn’t a game for Chicago Bulls power forward, Carlos Boozer. Between his busy basketball schedule, working out with his trainer, and spending time with his family, Boozer still manages to make time to serve as an ambassador for an organization near and dear to his heart: Dribble to Stop Diabetes.

Boozer and DTSD has team up with the NBA, WNBA, NBA D-League, Sanofi US, and the American Diabetes Association to raise awareness about the disease. The DTSD Website features a risk test that Boozer strongly recommends his fans to take since two to three people are diagnosed every minute and seven million people remain undiagnosed in the United States. The outpour of support from Boozer's Twitter followers has been overwhelming. After Boozer tweeted about his visit with kids in the hospital at the University of Illinois-Chicago, many of his followers wanted to know how to get involved; some were so passionate about the organization that they even asked about job opportunities. But DTSD isn’t just an organization to Boozer, as diabetes hits close to home for him and his family.

Today, 26 million Americans have diabetes, including Boozer's aunt. His late grandmother also struggled with the disease since Boozer was just a teenager. “My grandma had diabetes, and she was going back and fourth to the hospital. Seeing ambulances pick her up… That’s when it really hit home for me and my family,” said Boozer, “so that made me much more aware of my health.”

Simply considering that his grandmother's battle with diabetes an eye-opening experience for Boozer would be an understatement. It was a complete lifestyle change. “As a kid, 17 years old, all your friends want to go to McDonalds and get burgers... I’d say ‘I’m cool, I’ll meet you guys afterward’, because you don’t want to end up going to the hospital for diabetes all the time. You think about that kind of thing; well, I did, I thought about that early in life.” And he’s passed that health awareness on to his three boys, 6-year-old Carmani and 5-year-old twins, Cayden and Cameron. Not only does he encourage them to stay active by playing sports (these boys play almost every sport under the sun!) and working with the same trainer he uses, but he also teaches them to use their health awareness for good on the playground and in the park.

During our conversation, Carlos told me a story that I haven’t been able to get off my mind -- After his son witnessed an overweight child being bullied at the park, the Boozers took matters into their own hands to help the little boy become more active and to teach the bullies a valuable lesson.

“I said, ‘Hey guys, instead of making fun of him, let's help him. Let's play catch with him, let's play basketball with him, let's just help him’,” he told me. “’Don’t make fun of people that may need help or that you may not like their appearance. If you want to do something, do something good, be beneficial and help them’.” After that day in the park, Boozer and his wife met with the little boy four weeks in a row to play baseball together. Leave it up to Carlos Boozer to not only help a child at risk for diabetes, but to stand up for anti-bullying as well. Seriously… What a guy!

While being an advocate for diabetes awareness, he also continues to focus on his goals for the upcoming Chicago Bulls season: “I just want to continue to improve everyday as a team,” he said. “Our biggest goal is to win a championship, and we feel like if we’re healthy going into the playoffs, with D-Rose [Derrick Rose] being back and everybody else staying healthy, we’ll have a chance to do so.”

I personally have the highest hopes for Carlos Boozer and the Bulls. With a guy who does so much right, how can the Bulls go wrong? Make sure to catch the Bulls' opener against the Sacramento Kings on October 31, and visit Dribbletostopdiabetes.com to take your risk test and find out how you can get involved!