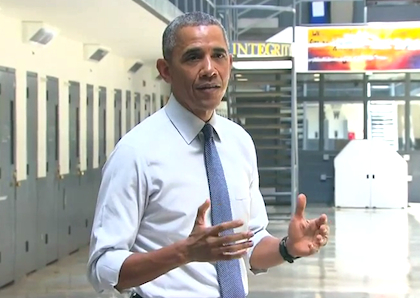 It’s not often here at YH that we get into politics, but sometimes there are special circumstances worth mentioning. Earlier this week, President Barack Obama did something no other American President has done before -- he visited a prison. Seems hard to believe, but it's true. The prison in question is an Oklahoma facility, which holds roughly 1,300 inmates. What makes it even wilder is that the entire thing was shot to be made into a documentary by Vice coming out this fall on HBO.

Obama said the visit was spurned by the fact that a lot of young people make mistakes, and the criminal justice systems needs to concoct a better way of dealing with and reforming these people. To get a better picture of things, Obama met with six nonviolent male offenders to hear their stories and the mistakes they made to get there. It left Obama leaving and saying this about the six he met: “When they describe their youth and their childhood, these are young people who made mistakes that aren't that different from the mistakes I made and the mistakes that a lot of you guys made." Obama continued, "The difference is, they did not have the kind of support structures, the second chances, the resources that would allow them to survive those mistakes." In the past, Obama has admitted to smoking pot and doing cocaine.

Obama also says he will be trying to make differences to reform the criminal justice system, which is something the documentary will go more into. But something interesting has already come out of this -- on Monday, Obama commuted the sentences of 46 nonviolent drug offenders, and since as of this writing, the number has gone up to 89. It’s more than the last four presidents combined.

All the facts aside, I’m excited to see this documentary. It’s really not often that we get a President readily putting himself out there in the media while he’s getting stuff done. It’ll be interesting to see his interactions with the inmates and how he and the inmates react to each other. Plus, it’s Vice… they just do a damn good job of documenting.