Possible "Charmed" Reboot and How the Charmed Ones Were (And Still Are) Supernatural Role Models! 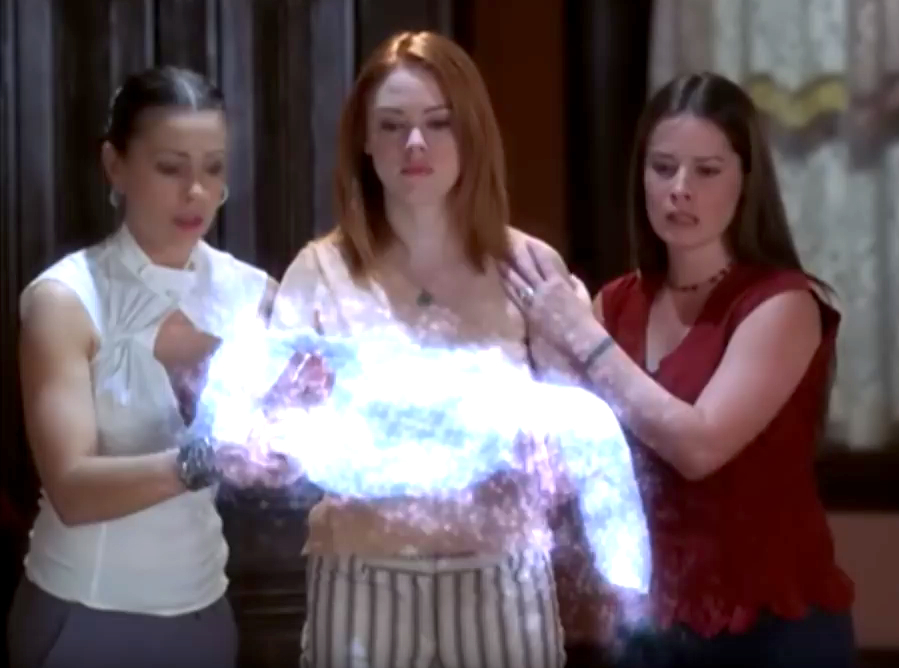 It was announced early this year that the late-'90s/early-2000s series "Charmed" would be getting a reboot on The CW. However, it would actually be a prequel, set in the 1970s, and would not feature the original "Charmed" actresses at all. Super sadface on that one. Since then, though, the project has been shelved for now, but there are high hopes for a new script and potential for it to be on the 2018 show roster.

I decided to prepare myself and go take a walk down Memory Lane and watch "Charmed" on Netflix and found that the Charmed ones kicked major booty -- and I don't just mean the demons!

For those who haven't seen or heard of "Charmed", the show follows three sisters who come back to their childhood home after their grandmother passes away. Prue, Piper, and Phoebe find themselves blessed/cursed with supernatural powers inherited from their family line. Due to the untimely death of their mother and an absent father, their grandmother raised them, and for their safety, bound their powers when they were children.

The sisters learn to control their powers while fighting off demons, warlocks, and other supernatural beings who are after their powers. At the end of Season 3, Prue is killed, and at the beginning of Season 4 Piper and Phoebe find out that they have a half-sister, Paige. With the power of three still in tact, the sisters must deal with having new roles -- Piper becoming the eldest sister and Phoebe as the middle sister, while helping Paige master her own powers.

On their journey, we see them try to maintain their careers, relationships, and the random demon or warlock here and there. No big deal, because juggling your life isn't hard enough.

Since I haven't actually watched the show since it ended in 2006 (putting me at a ripe 14 years old), I was surprised to see the immense and amazing character growth and development of the Charmed sisters. Growing up, I always knew that I loved the Charmed ones, and looking back I'm glad that I had them as role models for myself. I probably owe a lot of my own female identify and empowerment from them.

Each sister was different in their story arcs and struggles, but each showed strength, passion, and vulnerability in situations that were very real and relatable in the midst of their demon ass-kicking lives. Don't get me wrong, the sisters weren't perfect; they were flawed, but that's what makes them great role models. Seeing them struggle and grow from their "flaws" empowered me to do the best that I can with or without my own flaws. But, most importantly, seeing the relationship the sisters had with each other, continuously working to help build their sisters up, gave me a huge amount of inspiration.

(*WARNING* SPOILERS AHEAD, but it's been over 10 years so I think I'm off the hook.)

The eldest sister with the power of telekinesis, and, later, astro projection, Prue was the protector and go-to of the family. She helped raise her sisters and protect them since they were kids. She tried hard to maintain her career at an art auction house along with her new-found Wiccan abilities. She was strong-willed and hard-working. Realizing that there was more to her life than a career, she decided to take a leap of faith and become a photo journalist (her dream job). But what truly makes Prue a great role model is her selflessness and how she empowered her sisters to go for their goals and realize their own greatness while doing the same thing for herself. Unfortunately, Prue was killed at the end of Season 3, but I like to think she was reunited with her childhood love, Andy, who had also passed away from a demon attack.

The mediator and, for the first three seasons, the middle sister, Piper was the glue that kept her family together. She had the power to freeze people and objects (with the exception of good witches) and, in the later seasons, the ability to blow up people and objects. Piper also dealt with career questions, but with the help of Prue, she was able to open her own successful club, P3, named after the power of three. Piper struggled in her love life, something that everyone can relate to. She spent the first season falling for emotionally unavailable guys -- one was a warlock, one was a ghost. And when she finally found love, he ended up being her whitelighter (that is, a guardian angel-type for good witches), Leo. This, however, was a forbidden love according to the "powers that be". Then, there was Dan, who was perfect but... he wasn't Leo, and her having to tell him he wasn't the one was so awful. [*tears*]

Piper inspired and taught me that you shouldn't be afraid to open yourself up to fight for the one you love, whether it be your significant other or your sisters. Piper ends up having two boys and a girl, thereby giving birth to the next power of three. Big smiles for this one!

The youngest Halliwell had the power to see premonitions of the future and the past and later the power to levitate. Phoebe was known as the rebellious sister and took to her powers quickly, becaming an expert very quickly and always encouraging her sisters to embrace their Wiccan inheritance. When they first received their powers, Phoebe was unhappy that she had an inactive power compared to her sisters, but while she knew her role was integral to defeating evil, she took kickboxing and self-defense so that she could hold her own against enemies. She is proactive and smart, and even though she fell in love with a demon (as you do), she fought through a lot of pain and struggle to find happiness while helping her half sister, Paige, learn about her powers and their family. Phoebe is a great role model because of how she takes what life gives her and makes the best out of it. She may have made some mistakes, but it's never too late to do the right thing.

We meet Paige in Season 4 after Prue's death. Her mother fell in love with her whitelighter (like Piper), therefore she is half-witch/half-whitelighter. She has the power to orb (teleporting through whitelighter powers), heal injuries, and telekinetic orbing (moving objects with orbing). Her parents had to give her up to protect her and she was adopted by the Matthews family. Paige's journey centered on finding out who she is and finding a way to help people with and without her powers, as she was destined to do. Paige showed me that the greatest thing you can do is help people, whether it be physical with her healing or mentally and emotionally by helping people navigate through their problems; sometimes, in helping others, you inadvertently help yourself.

All the sisters are great role models in their own right. At the time the show aired (1998-2006), "Charmed" gave us female characters that weren't just the typical damsels in distress or a sexy figure to look at. "Charmed" gave us strong, empowered, badass women who empowered others!

All we can hope for is a awesome new pilot for a "Charmed" reboot and pray they find a way to give the original Charmed ones some kind of cameo in the reboot! I need the Power of Three back in my life!