Pokemon and Other '90s Properties That Could Use a Big Screen Reboot! 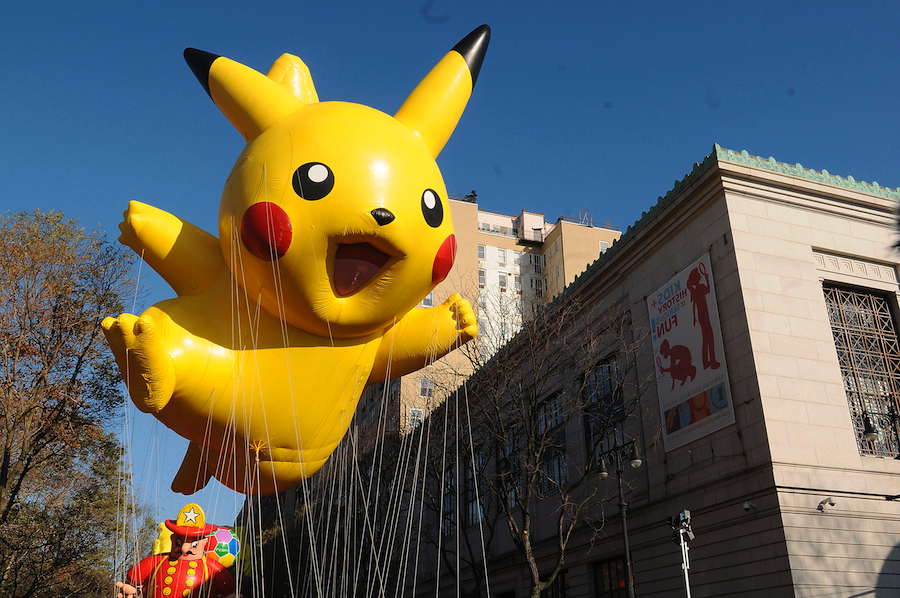 Now for something completely... expected: Studios are currently in a bidding war over a live-action Pokemon movie! Legendary, Sony, and Warner Bros. are all vying to bring the popular franchise back to the big screen (which is already a video game, trading card game, TV series, films, and has spawned as much merchandise as Hello Kitty).

Pokemon first became a major facet of pop culture in 1995, when the world was introduced to the game of capturing fictional cuties like Pikachu, and training them to fight in battle. Pokemon is still as popular as ever, so it is certain that whichever studio does manage to catch them all is sure to have a box office hit on their hands.

The Pokemon will most likely be presented in CGI form, rather than by actors in giant Pokemon costumes. While this makes the most sense, I do wish we could see Pokemon in giant foam costumes -- remember the amazing early-'90s Teenage Mutant Ninja Turtles films? Classic.

This possible remake of a beloved '90s entity made me think about all of the other '90s properties that could use live action remakes. Here are just a few that could use a reboot:

Remember this insane rip-off from “Teenage Mutant Ninja Turtles”? Many have assumed that Sharknado was the first shark-related campfest, but Sharknado’s got nothing on the glorious mess that is “Street Sharks”. This '90s cartoon followed a group of teenagers who have an encounter with Dr. Piranoid, who turns them into crime-fighting sharks. If that wasn’t weird enough, they all love hamburgers and have random shark-related catchphrases like “Jawsome!” “Street Sharks” insanity is what made it so brilliant, and I imagine the Street Sharks in a modern, urban atmosphere would be great. Just imagine what their tweets would look like.

The love for “Animaniacs” runs deep (if you don’t believe me, check Buzzfeed). The show, drawn in the style of the Looney Tunes, featured three adorable animals (or aliens? I honestly have no idea what they were), Yakko, Wakko, and Dot, who went on wild adventures. Modeled closely after the Marx Brothers (but with a girl), “Animaniacs” was filled with slapstick humor and fun. It would be interesting to see the main three try to deal with the real world (and, of course, they would still have to live in the Warner Bros. water tower) and what havoc they could wreck on an actual film lot (bonus points if they can find a way to work in “Pinky and the Brain”).

Where in the World is Carmen Sandiego?

For a while, there was a rumor that there would be a live-action Carmen Sandiego movie and that Jennifer Lopez would star as the globe-trotting spy (I think she’s a spy? Or is she a bad girl? This is never 100% clear). Sadly, the film has never been made, and I want to know why. Carmen Sandiego would be a great film heroine -- she travels around the world wearing a fabulous red coat and getting into all kinds of trouble. What more do you need for a spy thriller? Give her a love interest and some kung fu skills and she could become the next super spy.

Remember these horrifying creatures? Furbies looked like gremlins who had hit the streets for an inordinate amount of time. I don’t think there is a way to make furbies “cute” (especially live-action furbies), so why not show them the way they actually are? A live-action furby horror movie would actually be terrifying. Directed by Guillermo del Toro, these furbies could come to life and haunt their unsuspecting owners at night…and our dreams.

The Legend of Zelda

Easily one of the most popular video games of all time, The Legend of Zelda has never taken off as a TV show or film. A TV series was attempted in the late-'80s, and there has been potential films, but none have come to fruition. This is quite a shame because The Legend of Zelda has quite a remarkable plot. The land of Hyrule is as complex as Middle Earth at this point, and with different games to pick from, Zelda could easily be turned into a full franchise.

Which '90s properties would you like to see turned into films?