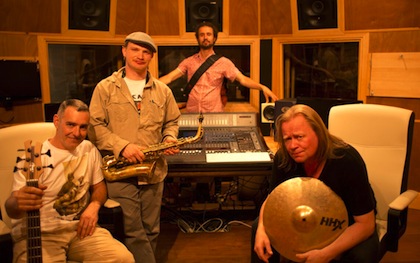 Band The Great Game has released a self-titled album of “new world” music that brings together more styles than you’re probably used to hearing in one place. The members of the band come from all over the globe, including Europe, South America, North America, and the Middle East.

Composer Mounzer Sarraf created the group to create a new sound while keeping the musical in influence of each member and their history intact. He met each person while traveling the world, and the first time they all worked together, they met up in Spain in 2014 to do so.

This self-titled album is what resulted. The new world sound that they are embracing could be called a mixture of world, rock, prog, jazz, blues, reggae, with some Latin American and Eastern European fusions.

As for the content of the music, the band is not afraid to get into the nitty gritty of the tough questions and therefore values spreading their word more than the commercial side of money and music-making.  For that reason, they’re actually offering this album for free. (So there’s really no reason not to get it!)

The band considers their real strength their live performances, so by giving the album away for free, they hope to become valued as a live band where they are in their true element.

With songs titled things like "Science”, “Television”, and “Religionism”, there’s not much lyrical subtlety involved in their aesthetic. “The Turning of the Wheel of Dhamma” has a real jazzy vibe, “Poetry in Motion” feels like an upbeat alternative rock vibe, and “El Hechizo De Hoy” is a sauntering worldly-sounding blend.

The Great Game is the perfect example of what happens when a group comes together for the simple shared love of music.

Keep up with The Great Game on SoundCloud and Facebook.