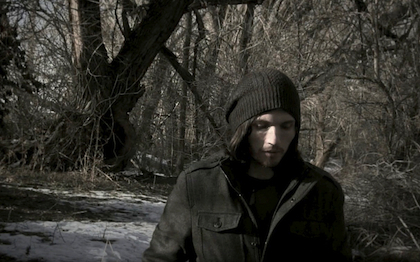 Richard Tyler Epperson is a Utah-based singer/songwriter/musician who’s claiming his passions through the release of his new album and its pop/rock blend of acoustic and electronic sounds. His album Hourglass dropped on April 8 and can be streamed here.

The 29-year-old has been playing music since he was 12 and started writing and recording music in his early teens. He played with a variety of bands over the years but really started focusing on his own sound when he reached his 20s. Hourglass is his second album, a follow-up to his debut Falling Between the Stars in 2013 (which he produced).

The talented multi-instrumentalist pretty much did everything on the most recent album besides play the drums. He works vocals, acoustic and electric guitar, bass, piano, keyboards, and strings.

The title track “Hourglass” deals with the changing perception of time with a lighter pop acoustic vibe; just his voice and the ‘ol swinging guitar. The whole album really has a focus on changes and what happens when you begin to consider what you’re doing with your life and how fast it goes no matter what you’re doing with it. A repeating theme in different songs is the assessment of what one is doing to follow their dreams or not. (Take the concept as a motivation as opposed to a reminder of something you might be procrastinating on.) The song “Like Always” brings in more instrumentals for an indie-pop-rock vibe and is still a great showcase of Epperson’s clear voice. His voice is evenly accessible throughout the album, keeping an unwavering and focused tone that starts to etch out his unique sound as a musician.

Of the album, Epperson says: "Listening back to the songs, I started to realize a lot of them had lines or hidden messages about how fast time goes by and about trying to find happiness in the short time we have. Those thoughts inspired the song 'Hourglass' and the name seemed to be fitting for me at this point in my life. Time goes by so fast, and we all get caught up in daily life stresses that take us away from our dreams and the things we care about. The more I grow up and the older I get, the more potent that thought gets. If you stop to think about it, the hourglass is always running, and it’s important to make sure you’re living life the way you want to be living it."