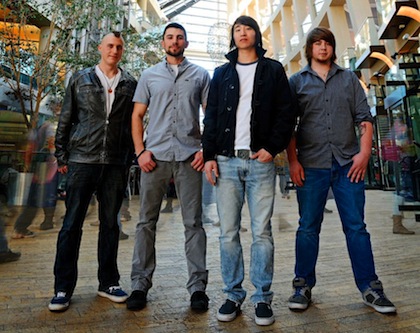 A new album entitled Life in Static  is soon to be released from pop/punk/alternative group Larusso, a quartet from Salt Lake City who are currently on a “Don’t Call it a Comeback Tour”. The group has been making a name for themselves around the SLC area, and have continued to branch out after several years of independently funded national touring campaigns.

Members of the band inlcude Aaron Condrat (lead vocals/guitar), Justin Trombetti (drums/vocals),Tyler "Fizzy" Grundstrom (on bass), andNick Sasich (on guitar), all of whom come from different sorts of musical backgrounds and came together with a common goal.

On their concept and aim, the band says: "Larusso has always been rooted in the belief that we, as individuals, can and will overcome the struggles and turmoil that we face in our day-to-day lives.Life in Static is a conceptual testament to this idea; it speaks to our nature as human beings, our hopes, strengths, downfalls, heartaches, and adversities. We want our listeners to take away one simple message from this record: We can always rise above and conquer; we can hear through the static in the background that we are invincible."

Their full-length album covers all that ground; the first single,“The Voice”, is out as a teaser for the album, which will be released on August 16.

Their sound encapsulates both the more classic pop-punk and '90s vibe, but is also modern and super high energy. They are clearly influenced by the punk that’s come before them and taking pieces of it to share their own vision of the genre.