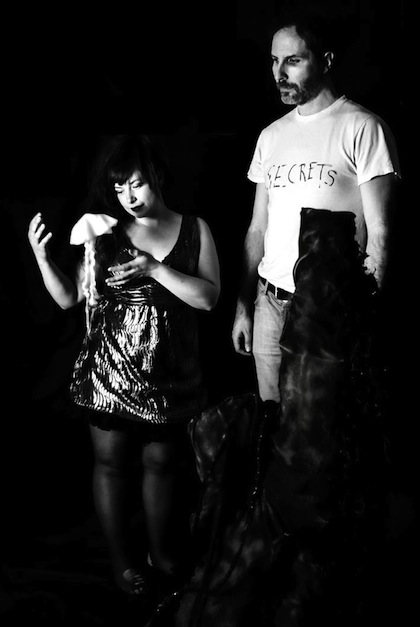 Both members of the group the Hydrothermal Vents have had extensive experience in the music world before coming together and turning a shared love for The Pixies into a unique post-punk/dance rock music fest. The duo from Montreal is made up of John Tielli (vocals, guitar, midi programming) and Tessa Kautzman (vocals, bass) and has only been together for two years, but they have already received a lot of attention in their regional market.

Their just-released new album is entitled Secrets of the Deep! and will be followed with a North American tour. Their vibe is experimental and dreamy but theatrical at the same time. (Their music wouldn’t be out of place in The Labyrinth, for example.)

The album content expands on the theme of their band name both in subject and in vibes, with upbeat punk beats and spoken word mixed in with their melodies. There are unpredictable moments but in the way of a rollercoaster as opposed to a car. It’s over there and then up there, but at the base securely on track.

The song “Neptune’s Grave” is catchy and has a live recorded music video to go along with it which showcases some of their high-energy performance skills. Tielli and Kautzman fit together incredibly well vocally and stylistically for being such different artists.

As for that band name? Their explanation: “Hydrothermal vents are deep-sea openings that erupt with super-heated, chemically-rich water from within the Earth's crust. Despite receiving absolutely zero energy from the sun, entire communities of bizarre life forms have evolved and thrive off of the energy provided from these structures. It has even been theorized that life on Earth may have originated near these vents.”