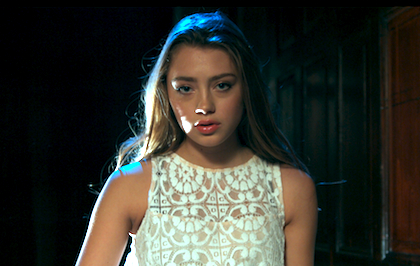 Chloe Baker might be a young pop artist, but her creative intent is not to sound like every other young pop artist out there. After writing music for about a year, the New Jersey native enlisted her own father to produce, and Bitter’s Kiss is the awesome indie pop result.

Chloe grew up around music, as her father was in a band and kept instruments and a studio in the house. Her first album is exploratory in nature, in the sense that she uses it like a diary to sort through feelings about everything from staying true to your identity to a specific incident where her cousin committed suicide.

The content is not light, but the music is, so the reflective nature of it is easy listening. Chloe also captures the vibes of melancholy that can arise in suburban life, which is perfectly young but deep feeling all at once.

To say that Chloe is talented is a vast understatement; even if she hadn’t written the music, her vocals alone are plenty to be a successful artist, but both of those together mean she’s probably just scratching the surface.

“Too Far Too Fast” is about watching her sister go off to college but could be about anything having to do with time passing quickly. It’s slow, moving, and could have come from a much older artist despite the gentle sweetness about her vocals. “Already Gone” has a little more swinging movement opened by piano, while “Waste of it All” is guaranteed to pull on the part of your heart that likes to wander around deep in thought. “Love Won’t Make You Cry” is exactly how it sounds, simplifying the concept of love to the pure goodness that it’s intended to be.

Chloe is currently attending a New Jersey arts academy called High Tech, and her goal is "to be a young artist creating music that gets away from teen pop and conveys deeper meaning." Looks to me like she’s already done that!