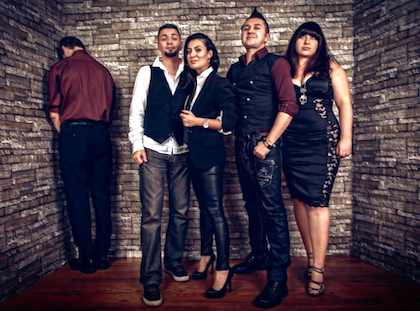 The band is currently located in San Francisco, but all the members originally came from different areas of what was formerly the U.S.S.R. They frequently play around the San Francisco Bay Area and at the occasional local festival and the Sacramento area.

Members of the band include Liana Tovmasyan (vocals), Margarita Grabarova (bass), Igor Boyko (drums), Alex Shrayber (guitar), and Tim Shulepov (guitar). The group has been playing together since 2011 and cite their inspiration from an eclectic mix of artists including Led Zeppelin and System of a Down to Sade and Black Eyed Peas.

Most of their music is sung in English to appeal to as many people as possible, although they retain some aspects of their culture in their music-making to stay true to their Russian roots. The ten songs on the EP were written over the past year-and-a-half; some of them will be familiar to people have seen then perform. There are some similar sounds on there to songs they have released in the past, but there has been a clear progression in the band’s growth that is reflected differently in this album as well. The band is confident that this EP shows their technical strength in addition to the charisma they have built through growing together.

Their track “Posers” demonstrates their vibe nicely, and the alternative female vocals alongside the music makes for a really awesome blend that is a little reminiscent of old-school No Doubt. “Bleed” is musically a little of the harder rock variety (with some explicit lyrics to go with it), with rapping on the vocal delivery. “California” is appropriately a little more laidback example of a song. All of their tracks are technically tight and differ in pace but tell the same story of who they are in each one.