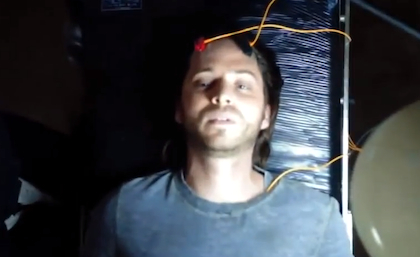 What if your only choice was survival? Wouldn’t you do anything to change it?

Is there anything else you need to grab your attention?

"12 Monkeys" is a SyFy series based on the original 1995 film directed by Terry Gilliam and starring Bruce Willis, Brad Pitt, and Madeleine Stowe. The story centers around a man named Cole who sent back in time to research a virus that has nearly wiped out the entire human race in the future. Cole ends up being institutionalized after he claims to be from the future. There, he meets Dr. Railly, a psychiatrist, and they both begin to have trouble in understanding what they believe to be true. In the film, little is shown of Cole’s past, which is actually the future. Yes, it gets this confusing.

The SyFy remake jumps on the same story premise. A man named Cole is sent back in time to prevent the beginning of a deadly plague that will take out billions of people in the future.

In the series, Dr. Railly is a virologist, who helps Cole figure out the secret behind a group called the Army of the 12 Monkeys. The series also delves into the future world -- or, in Cole’s present -- bringing perspective into the dystopian wreckage from the virus’s aftermath. Still with me?

Like in many time-traveling plots, fate, destiny, and pre-destination are themes that are explored throughout the series. I personally love time travel stories, and each one has its own rules about the phenomenon, but I found the theories from "Lost" to be the ultimate and best explanation all condensed into a conversation between Miles and Hurley:

If that conversation was confusing, then you’re on the right track, because much like time-traveling, "12 Monkeys" is a confusing but interesting series!

So who are/what is the Army of the 12 Monkeys?

Maybe we shouldn’t be asking questions. But if you want to know more about the series, check out the website.

Don’t forget to catch "12 Monkeys" on SyFy on Fridays at 9pm!