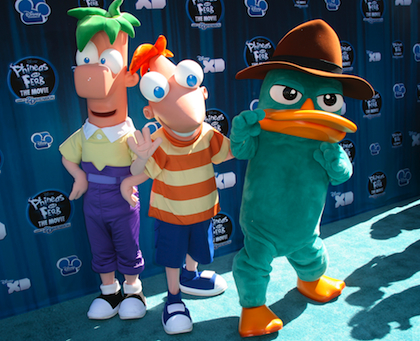 I’m not gonna pretend that “Phineas and Ferb” isn't awesome. Because it is. It’s exceedingly clever for a children’s cartoon, and how can you not adore Perry, Phineas and Ferb’s pet/superspy? But when you think about it, the show is fairly mysterious. Who exactly is Perry? Where in the world is he? How did he come to be a spy? And how do Phineas and Ferb complete their projects so quickly?!

Hopefull,y some of these questions will be answered in an upcoming episode. “Lost” showrunner, Damon Lindelof, has recently written a “Lost”-themed episode of “Phineas and Ferb”. Yes, you read that right. The episode will feature a “mysterious locked capsule” in Phineas and Ferb’s backyard. When the pair manage to jimmy it open, they realize they’ve unleashed something they can’t control. We can all take bets on whether or not it’s a smoke monster, a polar bear, or a long-lost relative of Perry’s. To sweeten the deal, “Lost” alum Terry O’Quinn will guest star on the episode as the voice of aptly-named evil scientist Professor Mystery. I secretly think that Professor Mystery may have been the original name for O’Quinn’s character, and that Lindelof has decided to parade it out now.

The episode will air on September 29. Are you excited for the “Lost”-themed episode of “Phineas and Ferb?”