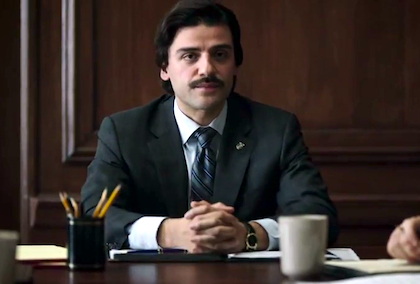 The recent saturation of pop culture news with what is seemingly an infinite amount of comic book-based movies and projects is surely a wonderful thing for people (like myself) who actually enjoy such fantastical machinations. And the fact that some of them might even turn out to be good movies ain’t a half bad little bonus in its own right. However, there comes a time for all good little boys and girls to receive a little shot in the arm containing a dose of reality, but for those of you out there that appreciate the finer things in life that extend beyond capes and cowls, then this seemingly sour bit of medicine will actually go down with some ease.

David Simon (along with fellow writers Lisa Belkin and William F. Zorzi) has written a new series for HBO which will debut in August. This is cause for celebration, for it is from the mind of Mr. Simon that we received "The Wire" and the HBO mini-series "The Corner". Both of those things are widely regarded as the greatest things that television has ever produced, so you can imagine there is some buzz over his new mini-series "Show Me a Hero", which will be directed by Oscar-winning filmmaker Paul Haggis (last seen battling body thetans and his own demons in the riveting HBO documentary Going Clear) and will star Oscar Isaac. You may remember Mr. Isaac as the actor who is currently in everything right now, which is to Everything's advantage, given how exquisitely talented this young man is. And as much as I’m looking forward to seeing Mr. Isaac destroy the world in X-Men: Apocalypse and then save the galaxy in Star Wars: The Force Awakens, it is his upcoming portrayal of real-life Yonkers, New York, mayor Nick Wasicsko that currently has my attention.

"Show Me a Hero" tells the story of Mayor Wasicko, who, in 1987, was forced by a federal court order to build low-income housing in the middle of a predominantly Caucasian middle class neighborhood. Fury, fear, and hatred soon split the city in half as it faced the inevitable reality of an integration many sought to avoid. The series boasts of an impressive supporting cast featuring Catherine Keener, James Belushi, Bob Balaban, Winona Ryder, and Alfred Molina, who will no doubt serve this story well, and it is a story that needs to be told and one that hits close to home during our own turbulent times. The series is based on a novel written by co-writer of the series Lisa Belkin, who, after seeing the alarming footage of what was going on night after night on the evening news, was inspired to tell the story of this small town that was nearly ripped apart, but was held together by it’s young and eventually progressive mayor.

The first two episodes of this series will appear back-to-back on Sunday, August 16. I, for one, am marking that date on my calendar, as I do not intend to miss what I hope will be a smart and engaging series brought to life with the help of one of the great television writers of all time. Peep the trailer for the series below.