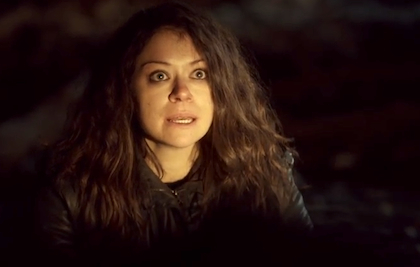 As I’m sure you know, Season 3 of the hit show premieres TONIGHT at 9pm on BBC America! So clear your schedules or set your DVR -- do whatever it takes so you don’t miss it!

The rumor mill has been working overtime lately, and it’s so hard to figure out what’s next for the #cloneclub. However, we can recap what happened last season to help you get ready for the premiere! If you aren’t caught up with the show, stop reading now -- warning, Spoilers ahoy!

Season 2 ended with Sarah, Alison, Cosima, and Helena offsetting the threat by the DYAD Institute. Yipee! They are one step closer to finding out who and what they really are. And, a book has appeared that might have the answers to the clones’ existence! However, it’s not all rainbows and butterflies here. Helena was kidnapped (nooooo!), and there was a super shocking, heart-pounding reveal -- there are creepy-as-hell male clones too, and we don’t know whose side they’re on! Dun-dun-DUN!

Immediately after escaping evil clone Rachel and the DYAD Institute, Sarah was forced to face an extremely creepy Castor clone. Like, literally, the episode pretty much ends with him licking his lips and staring at Sarah in the creepiest way possible… Just a reminder, folks, Project Leda involves the female clones while Project Castor involves the male clones. According to some sources, unlike the sisterhood, the boys grew up together, fully aware of who and what they are. They were developed by the military and trained to finish their missions no matter what! What’s their newest mission, you guys?? Possibly killing off the girls (don’t forget that someone is trying to hide their illegal experiment)? Uh oh…

Let’s not forget about Cosima’s ailing health, Alison’s marital challenges, and Sarah’s struggle of choosing between being a good mom to Kira and protecting her sisterhood! C’mon girls, you got this! You have to get Helena back, stat!

Some questions that come up with the Season 2 finale:
1. Can the boys reproduce? Because the girls can’t… except for Sarah, obviously.
2. Do the boys actually know they’re clones?
3. Where the hell did Helena go, and why was she chosen out of everyone else?
4. Is Cosima going to survive? Poor sicky.
5. What side is Mrs. S really on? This is probably the trickest one.
While we all sit here with puzzled looks on our faces as we try to figure out what’s happening next, we might as well watch the three promo trailers that BBC released of the new season! Enjoy!
(Screenshot via YouTube)
- Nicole Koch, YH Staff