"Orphan Black" at Comic-Con '16: Searching for Some Quiet Time 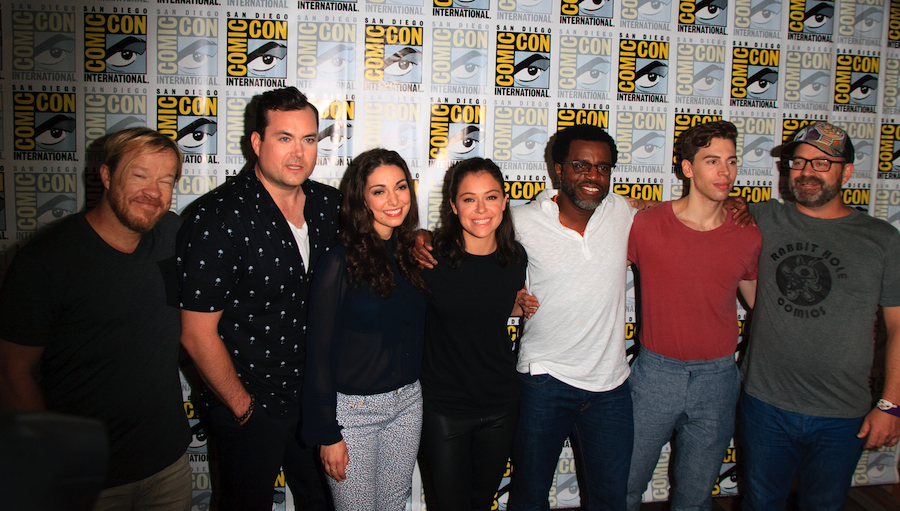 BBC America’s award-winning series “Orphan Black” will debut it’s fifth and final season in 2017, and the cast had quite a bit to say about it when they visited Comic-Con.

We last left Sarah and her clones (all played by the incredibly talented Tatiana Maslany) having settled into a somewhat normal life -- but as Season 4 proved to us, the madness is never quite over for Sarah and her sisters. Felix (Jordan Gavaris) realized that, even though they are not technically related, his heart will always be with his foster sister Sarah, as well as all of her (clone) sisters. Meanwhile, Art (Kevin Hanchard), a veteran detective and the former partner of clone Beth who got Sarah involved in the clone madness to begin with, revealed why he was so heartbroken by the loss of his partner and why he will remain loyal to her sisters. And finally, Donnie (Kristian Bruun), the husband of uptight soccer mom clone Alison, proved that he can actually be tough (which his wife loves) but that domestic bliss may not be entirely possible. Although the cast doesn’t know too much about the fifth season, they did reveal some of their characters' favorite moments and what may be next for them!

YH: Tatiana, do you have any plans to produce or direct? What’s next for you?

TM: I don’t know. I’m open to whatever is going to come up. I would love to do some theater again. As far as producing, directing, and writing, all of that is for the future. I don’t have any set plans, my world is open wide. There’s a big question mark.

YH: Tatiana, did you feel that having a background in improv help you take on so many different roles?

TM: Definitely. Everything in improv is relatable to acting, in terms of saying yes, listening, and creating with your partner. But what improv really taught me was to believe a situation even if all the parts are not necessarily there. Kathryn and I sometimes work on clone scenes where she is in the frame and I get to work opposite of her, and sometimes she’s removed and I have to talk to a tennis ball. Then it’s about having to let my imagination fill in the blanks and create the scenery, which is very much from improv. Character creation is key as well -- in an improv show, you’re always stepping into a new character at the drop of a hat, so there is a real joy in that.

YH: Is there anyone in the show you want to work with again?

KA: This has been the best job that I could have imagined. I’ve learned so much about everything from Tatiana. If anyone said, “Do you want to work with Tat?” it would be an immediate yes. I would work with her as many times as I could, as well as anyone in the cast. I’ve become so aware of how unique “Orphan Black” is and how tight-knit of a group this is, and how wonderful and welcoming everyone is. I would happily work with any of them again. 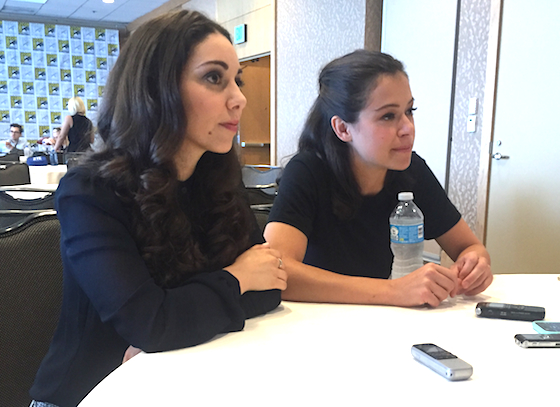 YH: Can you give us a sneak peek of Season 5?

TM: There will be a feeling of conclusion, whether that’s death, a resolution, or some kind of peace. I don’t totally see that these characters are destined for a quiet peacefulness; I think that their spirits are restless and their energies aren’t tameable. I don’t know where they will end up. I’m not sure that they will get what they want, but they will get what they need. [laughs] That Rolling Stones reference.

YH: What is one message you would like your fans to take away from the show?

TM: Right now in the world, there’s so much fear and so much hate of the “other”. We’re separating ourselves from each other and saying that you are different to me. We need acceptance and love of yourself as well as the people around you. You shouldn’t hide who you are. After events like Orlando, people want to hide because we’re so exposed. I think we can’t hide.

YH: Jordan, Felix has a rather interesting sense of style. If Felix were to come to Comic-Con, who do you think he would cosplay as?

JG: That is the best question I’ve had so far this Con. Andy Warhol, maybe. I think maybe Andy Warhol as played by Bill Hader in Men in Black III. Naturally he would have to layer that to be ironic.

YH: Kevin, how far in advance did you know about the relationship between Beth and Art?

KH: I didn’t know about it. But as an actor, you sit down and you try to fill in the backstory that’s not given to you. I take pride in the fact that I am a theater-trained actor. When you are in the theater, you are given a script from A-Z, so you have the whole road mapped out for you. But in film and TV, you don’t get that. You have to try to fill in the blanks or pick the brains of the creators and writers. I was trying to reconcile why and how this straight-laced cop was getting involved in something that was so far off the roadmap. I figured that there had to have been some sort of relationship that way. I didn’t have official confirmation of this until the start of Season 4, when [series creators] Graeme [Manson] and John [Fawcett] confirmed it.

YH: Jordan, Felix has been rather into drugs and alcohol, as well as his sister. But now that life has gotten so serious, do you think he will find the need to sober up a bit?

JG: When we find Felix in the first episode of the first season, he’s trying to unload a brick of coke, and now he is going to a bar and trying to pull his sister out of a dangerous situation. There has been a lot of movement as a person. I think Felix reflects the idea of what we do when we want to escape our reality, but he is making the decision to not escape his reality. This is kind of what makes him more serious. As we have gone throughout the show, he’s gotten progressively more dispirited -- not in a morose way, in that he is lower... he’s more grounded, there’s more of a complexity to him. I think that comes from the fact that he’s being forced to stay present. I’m trying to come into this last season without knowing who Felix is, even though I have played him for four years. I would like to challenge myself, and it’s okay to not know who he is. We won’t lose his affectations or physicality that makes him Felix, but I would like to just toss out all ideas about who this person is and where it goes.

YH: Jordan, have you had a favorite line of Felix dialogue?

JG: Oh yeah! I was thinking about this the other day. I think my favorite is, “Does your daddy have a drinks trolley?”

YH: Where would you like your characters to go that they haven’t gotten to yet?

KB: They should all go to a beach somewhere. All the clones and their families…[laughs] I would like to see Donnie and Alison get their family life back together. I think, ultimately, all the characters want safety. They want security. They want to be normal, regular human beings, and have the lives that everyone else has. That’s certainly true for the Hendrixes. And they want to enjoy this extended family without all the danger that comes with it. 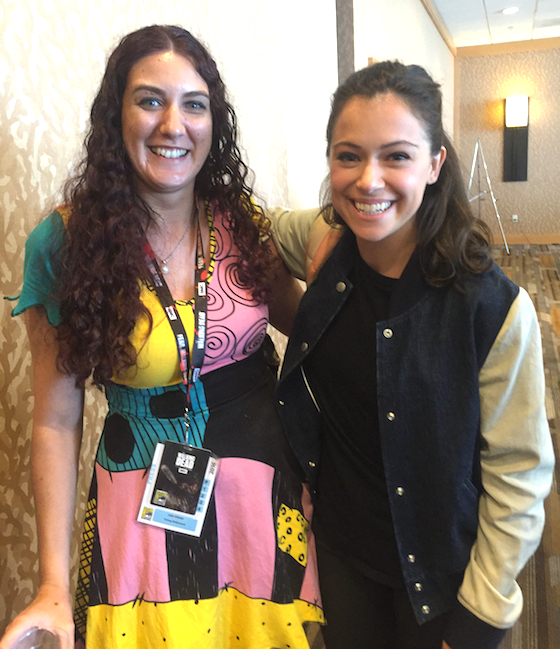