Original 'Halloween' Creator Hoping to Reboot the Series Himself! 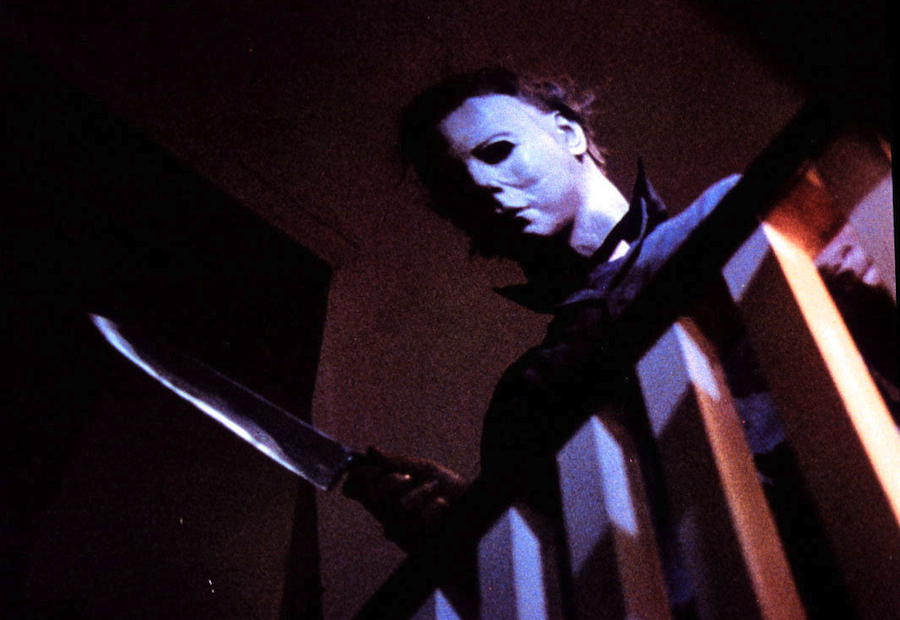 I love horror movies. Sure, it’s usually in a snarky “this is stupid” kind of way, but I love them nonetheless. There are a few horror movies, however, that don’t fall into this category. Among these special flicks are A Nightmare on Elm Street (although it’s definitely got a lot of dumb/funny moments), The Exorcist (but I am a messed-up individual and I do find quite a bit of comedy in this film), the sadly little-known Behind the Mask: The Rise of Leslie Vernon (pure genius) and Halloween. Recently, it has come to my attention that original director John Carpenter is looking to make another chapter in the Halloween franchise that is rumored to be the total last.

Details about this latest move from Carpenter are thin at best. Carpenter can’t even tell you for sure if it’s a sequel, a remake, or a reboot. So far, he’s told the press, “What I can tell you is, it’ll be a movie.” But there’s some promise in other known details. We know that Carpenter is looking to keep big studios out of this production and the budget will be relatively small at around $15 million. Without the interference of big studios, this means it’ll be more akin to Carpenter’s vision, which started in 1978 on a budget of about $300,000, and even back then, that was considered extremely cheap to make a movie.

Since news broke out of this latest turn back to Halloween by Carpenter, he has spoken about it’s iconic killer, saying, “Michael Myers is not a character,” he said. “He’s not a person. He’s a force of nature. He’s one-part human and one-part supernatural.” If you are only familiar with the more recent Rob Zombie reboot, this is where Zombie’s and Carpenter’s visions differ. Zombie’s first movie begins examining Michael Myers at a young age, while Carpenter plops you into the middle of the action without really knowing much about the slasher behind the mask. It is also one of the first cases of the horror movie phenomenon of the “final girl”, who is often a pretty young virgin who ends up being the soul survivor in these horrific horror movie attacks.

Internet reader, you may not be familiar with this franchise, or you may only know the Zombie reboot and remake (who the heck really knows the difference), which is why I’ll bring you through the twists and turns of Carpenter’s franchise. Warning: Potential spoilers ahead.

The one that started it all, and widely considered the birth of the "slasher" film. The place is Haddonfield, Illinois, named after writer/producer Debra Hill’s hometown of Haddonfield, New Jersey (because New Jersey had a bad enough reputation even before all that “Jersey Shore” nonsense). Michael Myers kills his older sister and is sent away for life in a mental institution for her murder. Older Myers later springs from his confinement (somehow drives a car despite most likely never taken Driver’s Ed) on, of all nights, Halloween, and rampages around town killing mainly hypersexual teenagers until he is stopped by party-pooper babysitter Laurie Stode (played by Jamie Lee Curtis). Always in the background for nearly every Halloween entry is Myers’s therapist, Dr. Sam Loomis (played by Donald Pleasence), hunting Myers down in an attempt to stop him.

Released three years later, this one actually takes place the same night as the first. It begins by following Myers after he is defeated by Laurie and mysteriously disappeared. Due to her injuries, Laurie is admitted to a hospital where Myers continues to stalk her and leaves piles of bodies in his wake (this time attractive hypersexual nurses and doctors). Loomis is, of course, looming around the hospital where he reveals to Laurie in typical Empire Strikes Back fashion that Michael Myers is her older brother. ("Noooo! That’s impossible!") If you liked the first installment but wish there was more of a body count, then this is the Halloween for you.

This is where things start to get weird. All other films after this are still canon in the Carpenter franchise, but this is the last time he’s involved in them despite the fact he’s only ever directed the first. This one loses a lot of people, though. Carpenter has said in the past that he wanted Halloween to be an anthology film series, meaning each movie would be a different horror story, kind of like what “American Horror Story” does. This film follows a doctor (not Dr. Loomis) trying to stop a series of children’s Halloween masks (that are the source of the town’s financial stability) made by a crazed Irishman from blowing up at a certain time. Then the plot gets even more insane and murky as android replicates are thrown into the mix at the end. Genius or just plain stupid? You decide. (Most likely a combination of both, though.)

After the failure of Season of the Witch and the success of Return of the Jedi, the new producer Moustapha Akkad thought they should bring back Michael Myers for their own Return installment. After all, there is such mysterious and unformed lore around Myers and his unquenchable bloodlust, which doesn’t seem to be ending anytime soon since he’s friggin’ immortal. Also, I feel I should point out that, since we live in an era of remakes and reboots, and it’s hard to tell the difference between the two, this film is what I would call a reboot. With a new saga for Myers comes a new “final girl”, this time in the form of Laurie’s bastard, orphaned 10-12-year-old daughter (and Michael's niece), Jamie Llyod (played by horror icon and “Roseanne” guest star Danielle Harris). Since being stopped in the second film, Myers was comatose but awakes at the beginning to seek more teenage victims as he interrupts them mid-coitus. Why are so many horror movie killers peeping toms?

Mindless killing machines during this time in the '80s seemed to have a common need for revenge that didn’t quite make sense. It was around this time that Jaws 4: The Revenge came out with a tagline that read “This Time It’s Personal…”, which makes zero damn sense. It’s a fish and in the words of Carpenter, Michael Myers is a force of nature, so why does he want revenge? Well, the subtitle doesn’t actually appear anywhere in the movie aside from DVD/VHS covers and trailers. Since I didn’t spoil the ending for the last one, I won’t for this one, but I’ll tell you that I see why Carpenter says he isn’t a fan but I still love them. They’re a lot of fun and really capture the creepy feeling of Fall, and yes, Myers is up to his old perverted-but-never-participating charms, and Loomis is still trailing him. Makes one think if Loomis is just into the same voyeuristic fetish?

Halloween: The Curse of Michael Myers (1995)

This one kind of brings the series back to Season of the Witch and things get kind of weird… but hey! A post-CluelessPaul Rudd is here! This entry tries to explain why Myers needs to kill, how he’s super strong, how he’s immortal, and, I guess, why he can briskly walk down a hallway and still manage to get ahead of his victims who are in a full-on sprint. They claim that Myers was magically granted these powers by a cult and then some creepy incest stuff happens. After this, it gets kind of tough to explain the plot, but Rudd plays an adult version of one of the kids that Laurie was babysitting during the events of the first film. The most interesting thing is that there is actually more mystery revolving around the production of this film than the plot of the film itself. The film went through many delays in production and post-production. Reshoot after reshoot. Re-cuts of the film were non-stop. Over the years, a very specific cut of the film called “The Producer’s Cut” was found by people, and this cut got, ironically, a cult following. With all other versions of the film deemed trash by many, this cut sat high above the rest with endless amounts of petitions for a DVD release and eBay flooded with bootleg copies. The Curse of Michael Myers is the only Halloween film streaming on Netflix, but beware… this isn’t “The Producer’s Cut”…

Want to see the “Producer’s Cut”? Below are the alternate scenes if you’ve seen the Netflix version:

This is quite an interesting one. The differences in the franchise aren’t staggering, but they’re noticeable. For starters, this is the first film without Loomis (aside from whatever installment Season of the Witch is supposed to be) due to the actor’s death, and then it takes place like none of the films since Halloween II happened. It doesn’t deny that the previous events took place, but aside from giving Pleasence a tribute and having Loomis already dead as well, they don’t really mention Jamie or any other characters. And no, Rudd does not appear in this one, but you’ve got LL Cool J and an appearance by a young Joseph Gordon-Levitt, along with some other notable names. As the title already tells you, this this takes place 20 years after Halloween and Halloween II. Laurie has a new life under a new identity after faking her death (one of the few nods to the 4th and 5th films), but once big brother Michael Myers finds out she’s the headmistress of a boarding school, he feels hot and heavy and ready to stab some boobs and boy butt… that sounded weird but trust me, Michael Myers is the sick one here…

Four years after H20 was released, the studio decided to make another Halloween movie. This time they kill Laurie off right in the beginning in an epic battle she has with her big brother. It leaves the audience saying, “Well, he was trying to kill her for over 20 years… what’s he going to do now?” Critics may have torn this flick to shreds, but I argue that this is actually one of my favorite horror movies for both inventive reasons and laughability, but honestly, it’s good. The movie follows a group of reality TV contestants that are tasked with spending the night in Michael Myers's childhood home while they wear POV cameras on them at all times that send a live feed to viewers. Following in LL Cool J's steps is another-rapper-turned-actor to lend his campy abilities to this flick, and his name is Busta Rhymes. Busta is easily my favorite part of this flick. He whips out kung fu moves and throws punches as quick as he does hilariously awful lines like, “Trick-or-treat, motherf****r!” What makes this flick interesting, though, is the fact that it uses the idea of going into a creepy place on Halloween and live streaming it to a wide audience. Something “Ghost Adventures” would do years later.

But that’s pretty much the movies in a nutshell. I did what I could not to spoil things, but, you know, sometimes things happen. I hope that Carpenter gets to put together this new Halloween movie. Even more than that, I’m on my knees praying it’s the canon final installment. It’s hard trying to watch all these remakes and reboots and trying to figure out what the difference between a remake and a reboot is.