AMC's "Preacher" Has Converted Us! 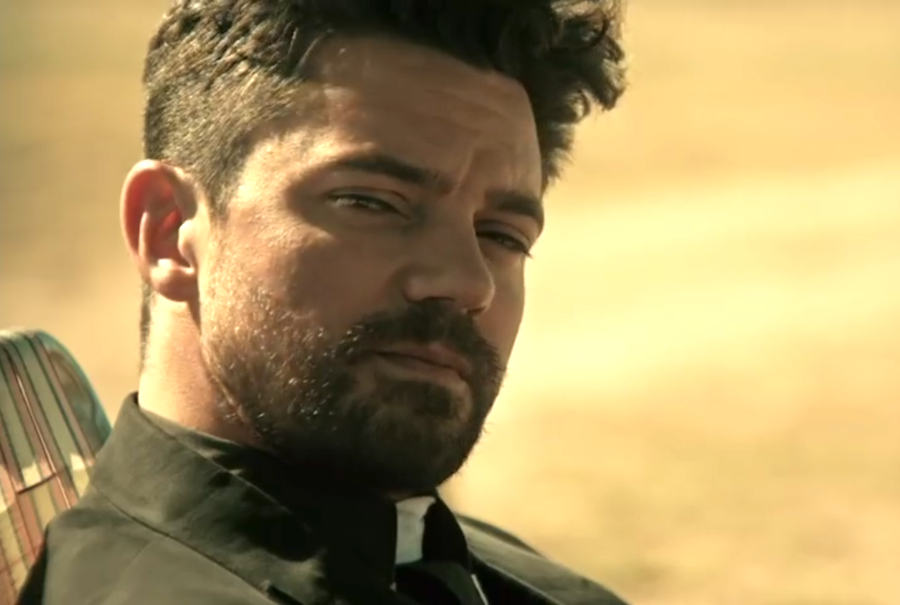 Last week was pretty rough for fans of Max von Sydow and innocuous phrases like “hold the door”, as once again "Game of Thrones" hogged all of the televised limelight with it’s stunning revelations and it’s carefully executed list of... well, executions I guess.

Truly it was a Sunday that people will not forget and for good reason; although, from my point of view, it had nothing to do with "Game of Thrones". No siree, last Sunday saw the debut of AMC’s latest television drama, "Preacher", and while that debut may have been lost to some under a sea of “Hodor!”s, fans like myself did not fail to take notice and ultimately rejoice at the sight of the long-awaited adaptation of the amazing comic book series from Garth Ennis and Steve Dillon. It was good. Heck, it was damn good. And not only that, but it was a sign (or a prophecy, if you will) of what could turn out to be an amazing series.

Be weary of mild spoilers ahead, my cunning readers...

"Preacher" is without a doubt the funniest, saddest, thrilling, depraved, funniest, blasphemous, poignant, creative, and funniest comic I have ever read. In short, it was the bee’s knees, and while an adaptation was always something I hoped for and welcomed with open arms, I was a little unsure of how they would actually go about it. Whomever the task fell to, I prayed that they proceeded cautiously and not forget to include a character descended from Jesus who spouts gibberish such as “Humperdidooo”. Well, I can’t speak for that latter request, but my prayers in regards to the former were indeed answered -- although the creators of Superbad were not the angels I was expecting to hear from. Seth Rogen and Evan Goldberg have indeed gone about this the right way, and to show them my appreciation, I promise to go in at least 50% on a bottle of bourbon should I ever meet them. Rather than just dive right in and begin throwing heaps of spectacle at the audience (like the comic does), we are given a proper introduction that takes its time and lets us settle into this new world with our characters while hinting at larger things ahead.

After a standard opening involving an African minister being exploded by an entity from space, we move to a small town in Texas and meet our titular preacher, played with expert weariness by Dominic Cooper. We see that he is a man not comfortable in the shoes that he is wearing, and while his dedication is present, it is noticeably waning at a quickening speed. Rogan and Goldberg allow for us to spend time with Jesse Custer as a preacher and his flock of townsfolk that he does his best to serve. They’re a flawed and mixed group of Texan citizens ranging from kind and caring to selfish and brutal, and perhaps Jesse sees too much of himself in these folks that come to hear him preach once a week and that fuels his unease. Or maybe he just doesn’t like his new job. We never got to see Jesse ply his trade much in the comics, and that the show allows us this chance to see Jesse as a wannabe man of God before things go south is a smart move that will provide some much-needed context and contrast when we delve deeper into the past of this strange man.

One interesting thing that I’d like to point out is that we don’t hear Jesse Custer’s name mentioned until about halfway into the episode when he meets up with Tulip for the first time. To everyone else in the show, he is just the Preacher, but when he is with Tulip, he is close to his old life and perhaps who he truly is, hence the reveal of his name. Tulip (played wonderfully and with a brightness by Ruth Negga) is an assassin who worked with Jesse in his former life and wishes for him to drop the holy man act. She is at once a funny, affectionate, and very dangerous character who is sure to please old fans and create many more new ones. To complete our little trio of antiheroes is Cassidy, an Irishman with a lust for booze, drugs, and blood. He is also a vampire, and this is a good thing because he doesn’t much care for Jesse’s pious side but is insanely curious about the side of him that likes to break people’s arms in bar fights. It must also be nice for him to finally interact with a person that doesn’t see him as an abomination... at least, not yet. Joseph Gilgun plays Cassidy, and he’s as good as a 10-year-old bottle of fine whiskey.

So, what’s down the road for "Preacher"? I’m not really sure. They’ve handled things differently with the story, but for the sake of this new format, it is entirely warranted. Will fans get to see everything they loved from the comic in this show? Well, The Saint of Killers has been confirmed, and the Meat Man is hinted at by the very existence of the Quincannon Factory seen in this episode. Will we see God? Will we meet The Allfather and Herr Starr? Will Arseface become the lead singer of an internationally famous death metal band? I don’t think I can answer these questions, but at the beginning of this episode, two angels visit Africa, and because of the location, they feel it appropriate to don safari gear from the early-1900s. Angels wear safari gear because they think that’s what they’re supposed to do when in Africa. Bless this show and may it have a long run.

In the meantime, check out our YH Studio interview with star Dominic Cooper below!