One to Watch: Dave Franco 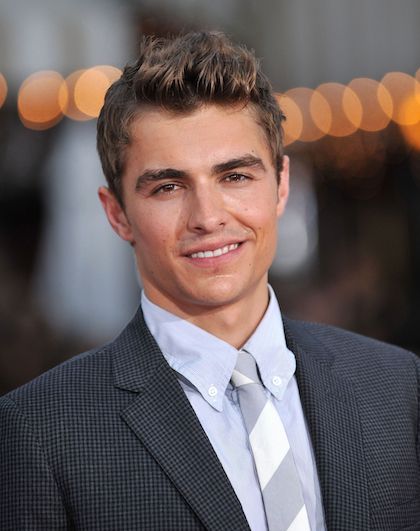 Watch your back, James Franco!
The ever-busy actor, director, screenwriter, author, painter, documentarian, performance artist, PhD candidate, intermittent "General Hospital" visitor, and Oscar nominee for 127 Hours may soon find himself competing for roles with his younger brother, up-and-coming actor Dave Franco.
Dave's first major film role comes this weekend in the remake of the beloved '80s vampire flick Fright Night, where he plays the high school buddy of lead Anton Yelchin.  It's a fairly standard teen jock bully role, but Dave has an on-screen charisma that clearly signals he's headed for bigger things.  And remember, even James started out in the low-brow teen comedy Whatever It Takes.
Dave has already appeared in small roles in the films Greenberg and Charlie St. Cloud, and in TV shows including "Scrubs," "Greek" and "Privileged" (where he played the dorky love interest of Lucy Hale, now the star of "Pretty Little Liars"). And he starred with Emma Roberts in the music video for the song "Go Outside" by Cults, which paid homage to the Jean-Luc Godard classic Contempt, starring Brigitte Bardot. Not to mention all his Funny or Die videos, including this recent NSFW one with his Fright Night co-star Christopher Mintz-Plasse.
Next up for Dave: a role as a drug-dealing high school student in the big-screen version of 21 Jump Street, starring Channing Tatum and Jonah Hill, which is due out next March. Plus he'll be in the indie The Broken Tower, which his big bro James directs and stars in as tortured 20th-century American poet Hart Crane. Dave plays the younger version of Crane in the film, shot in black-and-white, which will screen at the Toronto International Film Festival next month.
Of course, Dave has a long way to go to catch up with his über-prolific brother. But we have a feeling Dave won't be in James' shadow for much longer.
(Image via VPC/WENN)
- Andre Chautard, YH Staff