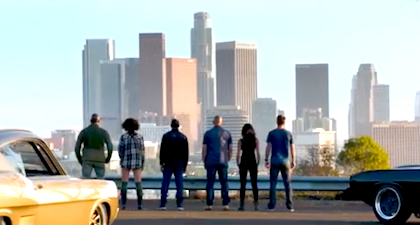 The trailer for Furious 7 was just released, and it is everything fans would want it to be!

Cars! Planes! Cars jumping out of planes! Crazy weapons! Crazy stunts! Tyrese! Ludacris! And the amazing Paul Walker at his finest. Mere words and exclamation points can't do the trailer justice, so here it is.

Ending with that inspiring Vin Diesel quote, “I don’t have friends, I got family.”

Goodness, and Jason Statham as the revenge-seeking villain takes the cake.

I am so excited for this installment of the Fast and the Furious franchise to come out! It’s been over ten years since the first film was released in 2001. Each movie perfectly created a full-length storyline that propelled the overall plot which takes us to the current Furious 7. All the films, while different, have been carefully intertwined to depict a captivating story.

This is also Paul Walker’s last film, as he passed away in a car accident while the movie was still in production. Many were concerned about how they would deal with Walker’s character in the film, but thankfully the writers decided against killing him off. Instead they decided to "retire" his character but leave room for the franchise to continue. They even used Paul’s brothers Caleb and Cody as body doubles and stand-ins in the film.

Many fans, including me, are probably wondering how Furious 7 will end and how they were able to continue without Walker. I can’t wait to see the continuation of the story, as well as Paul Walker’s final bow.

Furious 7 is set to release in theaters in April 2015!