One Direction Releases the "Best Song Ever" 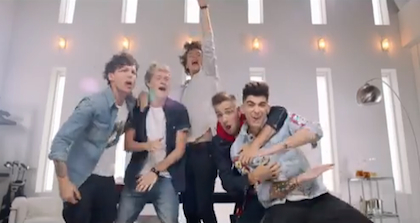 The Hollywood Sign flashes across screens and fans hear the raspy voice of a wheeling-and-dealing Hollywood executive.

It’s Jonny The Studio Exec, a balding, hairy-chested stereotype who looks suspiciously a lot like Tom Cruise's character in Tropic Thunder, telling Harvey The Studio Exec about his almost-tryst with Angelina Jolie as they await their next meeting with new talent. Sexy Assistant tells them One Direction has arrived.

The five superstars made fans double-take and double-click over the “Best Song Ever” video, which broke the VEVO 24-hour record with 10.9 million views in a single day. But putting on scull-caps, drag, sweater vests, and high socks, I can’t say I’m surprised.

The boys manage to outline the hit music video with a promotion for their movie, This is Us, coming to theaters this year, by showing, not telling, fans that they haven’t lost direction. And their American accents ain't bad either.

By taking on the roles of stereotypical Hollywood higher-ups, 1D mocks the people who’ve tried to change their image: Niall as Harvey the Studio Exec, Louis as Jonny the Studio Exec, Zayn as Sexy Assistant, Harry as Marcel the Marketing Guy, and Liam as Leeroy the Choreographer.

One Direction is going to stay loyal to fans and themselves no matter what, and turns out, that beats the Hollywood competition.

The five-man band topped Miley Cyrus’s "We Can’t Stop", Selena Gomez’s "Slow Down", and Robin Thicke’s "Blurred Lines" in VEVO’s 24-hour view count. Like I said, their booming video release teases an ultra goofy movie-to-come in This is Us and we know one thing — at least 10.9 million will be filling theater seats!