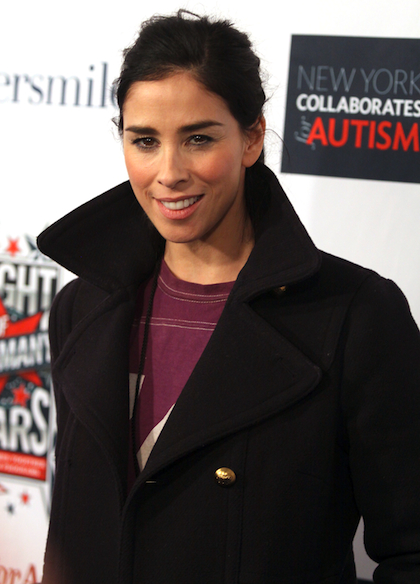 If you're like me and totally stoked that stand up comic Sarah Silverman’s got an HBO series in the works after they picked up her pilot his past December, than I’ve got more great news for you!

Silverman’s new show for HBO doesn’t have a name yet, but we do know the premise, which will revolve around the adventures of a “pathologically honest woman” named Jude (Silverman) as she tries to manage her “modern mid-life crisis.” This is an educated guess on my end, but I’m going to assume conflict is going to grow from the fact that nobody really tells the truth anymore. I mean, isn’t that why we have Twitter?

What’s completely new news about this show is that they have now cast fellow comedienne Kerri Kenney (“The State”, “Reno 911”) and British actor Jack Davenport (the evil British guy in the first Pirates of the Caribbean trilogy and the good British guy in the beginning of Kingsman: The Secret Service). Kenney will be playing Jude’s sister Melissa, who is described as “holding the family together, with no idea her home is built on lies.” Davenport will playing a “broken Brit” in a relationship with Jude (semi-appropriate as Silverman is dating a Brit in real-life, namely "Masters of Sex" star Michael Sheen) and is said to be “caught up in his own virtual reality in Seattle”, so he’s probably some sort of tech or computer science guy. He may even be a video game developer. Either way, I’m sure he has a caffeine addiction. I know I would if I lived in Seattle.

This isn’t Silverman’s first time dealing with HBO. Silverman had a small run after her one season stint on “SNL” as Wendy on “The Larry Sanders Show”, which was a comedy show that helped put HBO on the map for original content and inspired shows like “Curb Your Enthusiasm” and “30 Rock”. You can see a complete compilation of Silverman’s three episode run on the show right below:

I can’t wait for Sarah Silverman’s upcoming HBO show… whenever it gets a title!