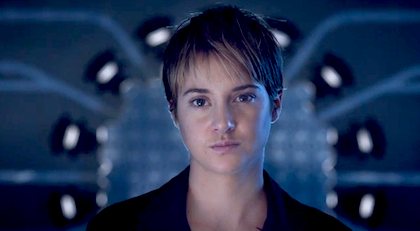 How funny does that sound when you read it? But it's true!

If you guys weren’t satisfied by the epic Insurgentteaser trailer that was released about a month ago, you’ll love the new one that just came out! This one reveals to viewers a little twist to the story -- Shailene Woodley’s character, Tris, is forced to fight herself!

But let’s back up a little. Divergent left off with Tris and her Dauntless boyfriend Four (Theo James -- ugh, so handsome) on the run from the Erudite Faction, whose leader Jeanine (icy Kate Winslet) is using simulations and other methods to transform the rest of Dauntless into her own personal army. Evil!

If you forgot these minor details, Jeanine wants to capture Divergents (people who are unaffected by simulations, like Tris) for her own selfish experimentations. And, of course, a Divergent is the only one able to unlock an ominously glowing box that Jeanine needs in order to complete her plans.

So, what comes next? Jeanine turns all of the Divergents into lab rats in order to find out who can open her beloved box! And who do you think that is? You guessed it -- Tris.

At 1:46 minutes in, Tris is seen hooked up to wires and locked inside a glass box. She sternly tells Jeanine, “I’m not going to fight you.”

Jeanine coldly responds, “Of course you’re not. You’re going to fight you.”

All of a sudden, we see Tris running towards Tris, and the fighting begins!

Also, things get real steamy between Tris and Four. Take a look!