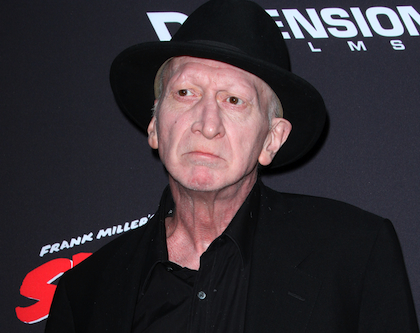 Yes! There is another installment in The Dark Knight series coming!

Just to play a quick game of catch-up, The Dark Knight Returns picks up after Batman has retired. Take a second to think about what the crime-obsessed Bruce Wayne would be doing with retirement... That’s right, he’s not a golfer. Realizing that retirement isn’t for him, and sick of seeing the level of crime rates drastically rise over his ten-year absence, he puts his cape and cowl back on to fight villains. The first one is Two-Face, followed by the Joker, who, after seeing that Batman is back on the streets, launches out of his catatonic state to take on the Dark Knight. (Once again proving that the existence of superheroes naturally puts the citizens of Gotham in danger. Keep in mind this isn’t fun-loving, jokey Joker. Okay, maybe he is that, but he is also the pretty stab-happy Joker that Heath Ledger partially used for inspiration.)

The Dark Knight Strikes Again follows the adventures of Batman after the events of The Dark Knight Returns. Yes, retirement still isn’t for him, and it’s clear that he’d end up in a body bag before an armchair at Arkham Lake Nursery Home yelling racist remarks during "Jeopardy". So, what’s an old bat to do? Fight Superman (sound familiar?) when his arch enemy Lex Luthor controls his mind. There’s no doubt that both installments by Miller have had a lasting effect on the Batman saga. In fact, both the movies starring Michael Keaton and Christian Bale draw inspirations from The Dark Knight Returns, and even the much-loved “Batman: The Animated Series” by Paul Dini is almost directly inspired by Miller’s efforts. (Fun fact: “Batman: The Animated Series” voice actor Kevin Conroy is actually the first person to ever make the choice to have Bruce Wayne change the sound of his voice when he becomes Batman.)

You still there? Take time to catch your breath after that crash course.

Cool, you’re back. There are no details on exactly what the new installment will be about. Miller is pretty insane, so expect something very dark and highly creative. Master Race can mean a lot of things -- it could have some part to play with Neo-Nazis, the fact that Batman is one of a few major DC-canon superheroes without any super powers, or even somebody like villain Hugo Strange creating a new race of God-like creatures. Who really knows what to expect? What I can tell you is that the series will be released in 8 periodical installments, like a comic book miniseries, in the Fall.

Until that time, you have plenty of other Batman- related things to check out in your spare time. Maybe you want to catch up on reading this Dark Knight series? Or maybe you want to see “Batman: The Animated Series” on Amazon Prime? Maybe both? Either way, let’s get excited for his to come out! Just remember who he is: