Could the Origins of House Targaryen Be the Next "Game of Thrones" Spin-off Series? 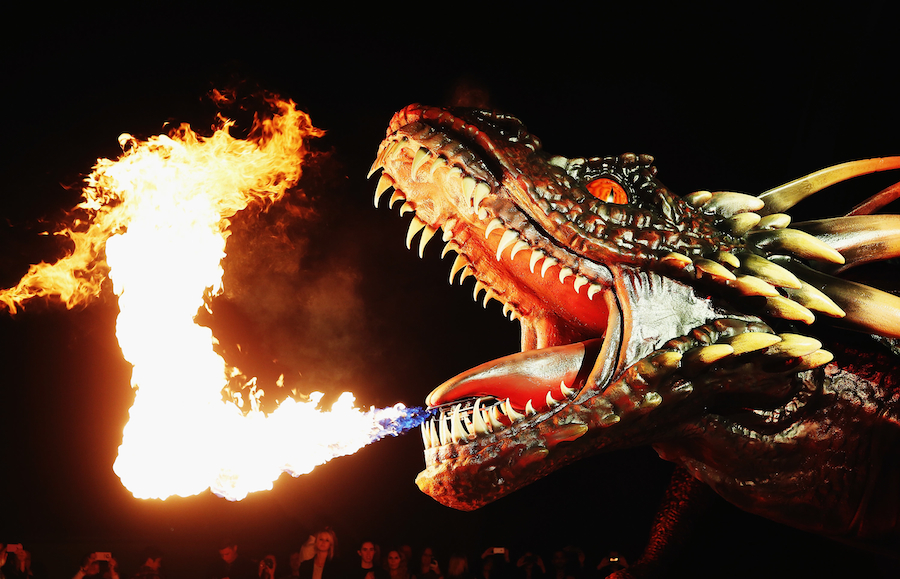 If you’re a “Game of Thrones” fan, you might have a passing memory of something called the “Doom of Valyria”, which was a catastrophic event that occurred on the ancestral lands of House Targaryen on the continent of Essos which forced them to flee to the safety of Westeros (and eventually conquer it). Show-watchers might recall Tyrion Lannister and Jorah Mormont in Season 5 sailing through the ruins of Valyria and being attacked by men afflicted with Greyscale (which Jorah then contracts). Book-readers will be even more familiar with the Doom of Vaylria, not only for its frequent mentions in George R.R. Martin’s A Song of Ice and Fire series but also companion texts such as The World of Ice and Fire, which details the history of the known world prior to the events of ASOIAF/GoT.

Now, it seems that this mysterious event – which has been likened to the lost city of Atlantis – might actually be coming to life as one of the four “Game of Thrones” spinoffs that HBO currently has in development.

According to an unconfirmed report published yesterday on the Game of Thrones Wiki page, the series, created and developed by Max Borenstein (writer of 2014’s Godzilla and 2017’s Kong: Skull Island), will be titled “Empire of Ashes” and already has a full 5-season arc planned out. Some other extremely interesting tidbits from this report includes:

- The show already has not one but TWO show bibles. The first one is just an outline for Season 1 alone, while the other one is a meticulously researched tome full of ideas, characters, illustrations, and more, for the remaining 4 seasons. From what we are told, the second bible is so big and detailed that it could serve as a companion piece to TWOIAF. Much of this info, apparently, was provided by George R.R. Martin himself. In short, Borenstein (and his team of as-yet unnamed writers) really did their homework this time!

- The show will touch upon the humble origins of House Targaryen, who, at this point in world history, were just minor dragon-lords.

- Oh yes, there will be dragons. So many dragons.

- The series will also feature the continent of Sothoryos, which, to my knowledge, has never been mentioned or referred to on GoT but is sort of TWOIAF’s version of Africa. And as such…

- The show will feature an extremely diverse cast, like almost 50% “non-white”. The casting calls have explicitly emphasized this, and no, these characters will not just be more token PoCs but will actually have prominent/lead roles. There will also be major LGBT characters and plenty of female representation. This committment to diversity apparently extends to the writers room too.

No word yet on when/if production starts on the pilot, but given the amount of materials that already exist (the 2 show bibles, concept art, etc), it seems like it could be sooner rather than later.

This news comes shortly after the official announcement by HBO that they are moving forward with a GoT prequel pilot by Jane Goldman (Kick-Ass, X-Men: Days of Future Past) centering on the Age of Heroes portion of Westerosi history. That series, which is reportedly titled “Game of Thrones: The Long Night”, takes place in an era which could be likened to GoT’s version of the Bronze Age. GRRM has actually written very little about this time period, so not much is known about it in canon aside from the legend of Azor Ahai (AKA The Prince That Was Promised, as he's referred to on GoT), therefore the TV series is kind of a “blank slate” project and could end up being just about anything. (Historically speaking, the aesthetic would have to be markedly different from GoT, but considering HBO is trying to sell this as a GoT spinoff, I suspect that it’ll be more familiar to the current series than it probably ought to.)

If picked up for a series, “The Long Night” is slated to premiere in 2020. That doesn’t mean that Borenstein’s series would be delayed, however; from what I understand, HBO is looking to create an entire expanded cinematic universe for ASOIAF/GoT akin to Star Wars, so it’s likely to see several projects airing concurrently.

HBO has yet to officially confirm “Empire of Ashes” but this source seems solid and the details were just too hype-worthy not to share. Watch this space for more!