Netflix's 'The Boys in the Band' Successfully Translates From Stage To Screen! 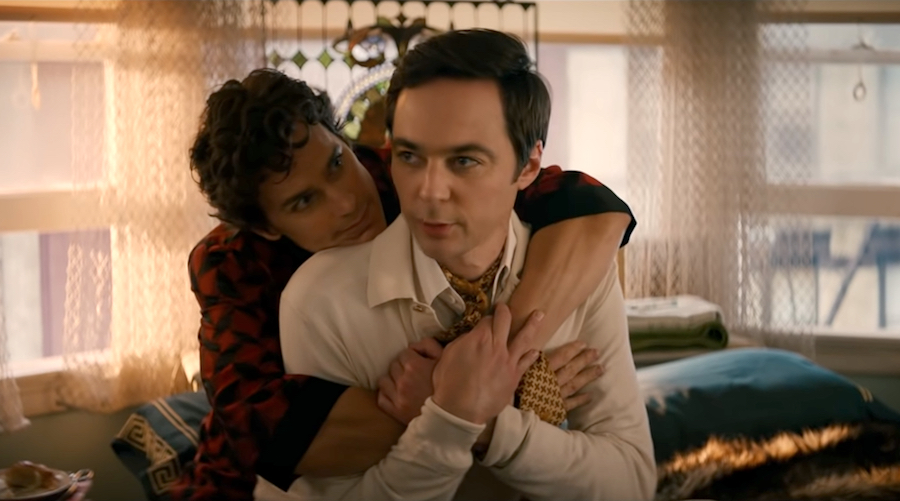 Glittered with moments of sensual beauty, The Boys in the Band is theatrical at its core. This is of course because the Netflix movie is based on the Mart Crowley play of the same name which premiered Off-Broadway in 1968. The Netflix adaptation -- produced by Ryan Murphy, directed by Joe Mantello and staring "The Big Bang Theory" starJim Parsons -- juggles a lot of themes dealing with getting older, being gay, and personal definitions of beauty.

The film becomes an illustrious yet simple pearl necklace at times, a collection of individual precious moments strung together. Although there are plenty of wonderfully shot scenes, the film itself is a gritty commentary on self-hate.

Thank you for all the love and support for The Boys in the Band this weekend. #proudboys ?ï¸‍? now streaming on @netflixpic.twitter.com/7neOtZvna6

Jim Parsons plays vicious party host Michael, a queer man struggling to walk an identity tightrope, balancing his sexuality with his Catholic beliefs. The party is thrown for Harold, played by the scorchingZachary Quinto, and all is relatively well at the party, with dance sequences led by the ecstatic Robin de Jesus and sassy side-glances made by Michael Benjamin Washington (who practically leads a masterclass in dramatic acting in the film). But soon the vice grip Michael has on the party begins to loosen as we find each character’s violent desires squirm to the surface. It isn’t always pretty.

The film feels entirely like a TV show at times since it’s so theatrically intimate and dialog-heavy. Because of this, the progression of the film lies mostly on the actors; there are few changes in setting, there aren’t any dramatic lighting shifts, and so the flow of the film is the burden of our players. For a film as intimate as this to work, the eyes of our performers must be crystal clear, their desires must be pure and in every subtly; otherwise, an entire movie practically filmed in one room would be boring and tired.

Luckily for us, especially towards the film’s second-half, our actors fight tooth and nail to get what they want and it’s thrilling to watch. It then becomes mostly about self-defense: evasion, projection, and violence.

By the film's end, two hours of meaty subtext renders down to small palm-sized moments of reflection as our characters pair themselves with what they need the most --  a lover, a friend, a drink, a book, God....death maybe? Who knows what that last shot means. The film never tries to give us specific answers, and that's it's most outstanding strength.

The Boys in the Band also features Matt Bomer,Andrew Rannells, and Charlie Carver. Check it out on Netflix now and experience its theatrical beauty!