Netflix's "A Series of Unfortunate Events" Review: An Unsullied Perspective 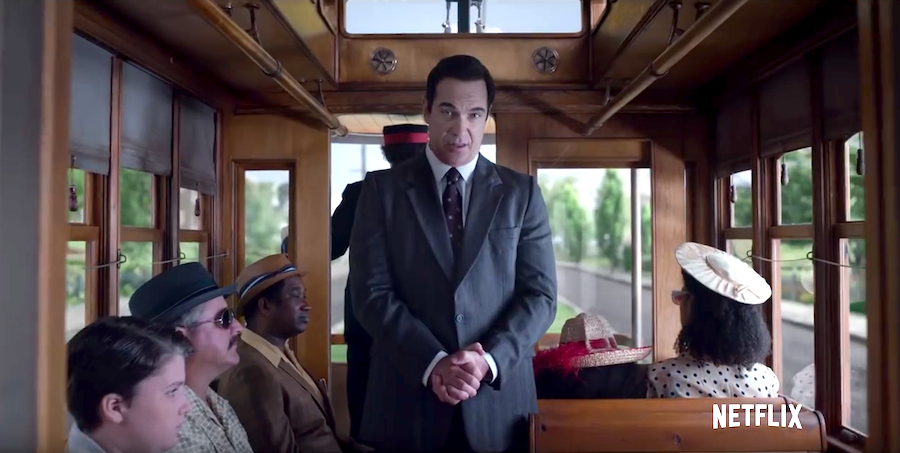 "The baby has teeth and does what?!”

All these questions and more were swarming through my head as I sat on the couch next to my book-obsessed girlfriend who put on a new Netflix show called “Lemony Snicket’s A Series of Unfortunate Events”. I heard about it once before when a trailer for a movie adaptation came out in 2004 starring Jim Carrey. Back then, I was 14, too cool for school, awaiting braces, breaking glass in parking lots, busting into abandoned buildings to make graffiti, blasting punk rock, and drinking 40s in the woods with my friends… needless to say, my rebellious, crooked teeth former self was not attending this film in theaters, as I assumed it was a one-off kid’s flick.

Flash-forward to now, where my vandalism days are over, my teeth are still messed up but at least straight, I love going to Disneyland but blast punk rock on the way there, and now I love “A Series of Unfortunate Events” (or "ASoUE”, for my acro-croonies in the house). Still, I have never seen the movie or read the books. In fact, last week was the first time I had any inclination that the TV show and movie are based on a book series, but my girlfriend loved the series as a child (I’m dating somebody younger than me #winning), so she got me watching it.

With all of that out of the way, I have to admit that this show is pretty hilarious with a biting wit, some thrilling action, is sad when it needs to be, and is stylistically impressive. It may be marketed as a kids show, but I don’t know many children under 11 or 10 I would have watching it because I’m not sure if it would make much sense to them. People get killed in the show, there’s a lot of brilliant and brilliantly dumb jokes, and it’s got “Arrested Development” levels of convoluted plots going on, but like that show, everything always ends up making sense eventually.

This first season of “ASoUE” consists of eight episodes with, from what I understand, every two episodes comprising one book, so the first season covers four books in total. Now this all sounds well and good but you’re probably yelling, “Get to what the heck this show is about already!” It follows a trio of oddly-talented, wealthy siblings named the Baudelaires whose parents die in a fire at their mansion. Afterwards, they are put in the care of a greedy, sociopathic actor (never trust a theater person) claiming to be a distant relative named Count Olaf (played by Neil Patrick Harris).

This isn’t a spoiler, as within the first few moments of the episode, he reveals his ultimate plan of stealing away the locked up trust fund belonging to the orphan scamps. From then on, it’s up to the Baudelaire children to protect their eventual fortune with each using their own unique skill. The oldest, Violet (played by Malina Weissman), an inventor; the middle child, Klaus (played by Louis Hynes), a researcher; and the youngest, who’s a baby, Sunny (played by Presley Smith and voiced by Tara Strong), has unnaturally strong teeth (you’ll see what I mean).

Now, that plot may not sound that interesting, but trust me, it is. Olaf is the constant antagonist to the Baudelaires, but what’s so fun about the character is that he is labeled as a terrible actor. Olaf’s schemes always involve him being a bad actor trying to act as a different persona, which seems like a fun role for any real actor to play. It’s got more layers to it than a wedding cake made of onions and takes a solid actor to pull it off. Without seeing the movie, I’m sure Jim Carrey did a bang-up job, but since I only have NPH to go off of, I think he gives a stellar performance. He’s got the comedic timing; he gives off nice tells with each character Olaf is playing that it’s really Olaf and made me really want to trip Olaf down a flight of stairs to watch him tumble. In other words, NPH hits this one out of the park.

I think another character and actor who aren’t getting the praise they deserve is the Baudelaire banker who handles all their guardianship affairs, Arthur Poe (played by Tony Award nominated actor K. Todd Freeman). He never ceases to crack me up as the constantly coughing (I wonder where that subplot is going) and endlessly oblivious banker. I’m happy he’s a part of the main cast. He’s in it enough to keep me happy but not too much that I grow tired of him, and his performance is just so much fun to watch. He reminds me a lot of Alan Arkin in Edward Scissorhands and I always have a soft spot for characters like that who can’t really see the ridiculousness playing out right in front of their faces. It’s a certain kind of insanity that hardly comes across as a true lunacy.

Mixed into this show is the narration by author Lemony Snicket (played by Patrick Warburton). Okay, so just gonna squash this right now. The author’s real name is Daniel Handler and put the book out under a pseudonym because he never wanted to write a children’s book ("misopedia" is the hatred of children, so there’s one for your back pocket). He was basically dared to write the children’s series that he would’ve wanted growing up, so he did. Handler also happens to be a writer on this Netflix series, so you know it's going to be a worthy adaptation.

What’s interesting is that Handler had fun with it and made up a side story for Snicket himself it seems. In each episode, Snicket gives narration and discusses the deceased love of his life, whom he dedicates each episode to. Her name is Beatrice, and little by little you learn more about their relationship, but much of it is missing. Will we ever get the full story? I don’t know, but part of what Snicket does is drop spoilers for the story left and right. He also warns you that what you are about to see is highly depressing and morbid and you’re better off, as the main title song suggests, looking away.

Narration has been utilized in TV and films since the moving picture was invented, but one like this has been unseen, at least to me. Much of the time that I’ve spent watching this show, whenever Snicket comes out of nowhere to elaborate on something, or just go off on a tangent, I’m often left wondering what it all means... He says he came upon the children’s story after the events occurred, but he’s often seen in different settings from the episode and then in the same setting of the episode. It’s hard to tell exactly what’s going on with him, and if we will see him meet the other characters on-screen, but be on the lookout for clues when he comes on. I could be wrong, but it feels like he is experiencing his own adventure that will soon make sense while he’s telling us this story.

On top of that potential subplot, there are a lot of other ones going on. Without giving anything away, the show seems to be about an Illuminati-esque secret organization. You have fringe characters in the background that come and go, who are involved in this society. So, while the kids are dealing with getting away from Count Olaf, there’s a whole espionage thriller going on, which may mean there are clues in the background of the set pieces, or in what people are saying left and right, that will take people with a lot of time on the internet to figure out (please, lose your job and join the herd).

If there is anything that I can take away from this show, however, is that I really don’t want to read the books. My girlfriend has already told me there are extra things going on in the show that she doesn’t remember from the book series. I can’t say what though (that is a spoilerific secret for viewers), but I can say to you that I’m happily in the dark as to what’s going on in this show, and the series holds up perfectly well without the books anyway. But if you want to read a book-reader's perspective, click here.

Now that I think I’ve talked your ear off enough about the show, let’s get to the final part of it all -- is it coming back? Netflix is notoriously inconsistent with when they renew shows for another season. Sometimes it’s the same week it hits and sometimes it is months later. I am happy to report that this show is part of the former and has already been greenlit for a second season consisting of ten episodes that will cover four more books. It is my understanding that, starting at Book 6, they get longer, so expect the fifth book to be two episodes long and books six through nine to be three episodes. It is expected that the show will have a third and final season to adapt the four remaining books, which, for you slow math solvers, puts the series at an unlucky thirteen.

No airdate for season two has been released at this time, so you have plenty of time to watch the first season, but keep an eye out for three-word phrases or titles starting with the letters V-F-D. Now listen to Count Olaf school us on acting and a topic he loves and knows best… himself.