NBC Flying to Neverland for Next Live Musical Broadcast! 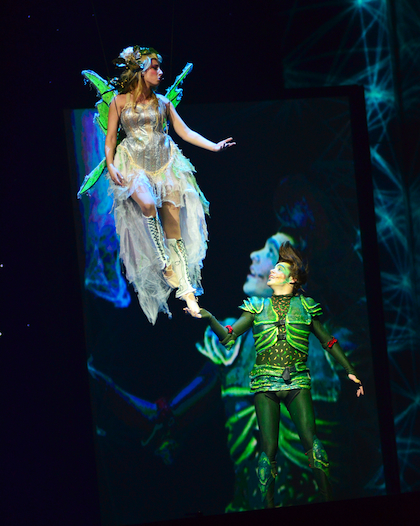 Despite its lukewarm reception from viewers, NBC has chocked up last month’s “The Sounds of Music Live!” special as a success. Whether audiences took to it or not is irrelevant – they tuned in in droves, and as far as the network is concerned, that is a success!

As such, it’s no surprise that NBC has quickly made plans for another holiday season stage presentation, and this year, that production will be… Peter Pan!

So, here’s the thing – one of the reasons viewers found "The Sound of Music Live" so off-putting was because it was a taped stage production. Many of the folks who tuned in to watch had probably not seen something like this before in their lifetimes, considering NBC had not done such a thing in about 40 years. But the fact of the matter is, these sorts of broadcasts used to occur all the time. And one of the most famous such airings was, in fact, the musical version of Peter Pan, which aired in 1960. For those with an hour and forty minutes to spare, you can watch the entire broadcast below:

NBC broadcast another version of Peter Pan in 1976 with different songs:

If you took a peek at the above videos, you noticed that Peter himself was played by Mary Martin and Mia Farrow, respectively. Yes, it is a tradition dating all the way back from the play’s initial inception in the early-1900s that Peter Pan be played by a pre- or post-menopausal woman. The reasons for this are sort of muddled, but my theory has always been that it was due to the play’s underlying “adult” themes, and the casting of an older woman as Peter created a safe zone for prudish Victorian audiences who might not have been totally comfortable with the relationship between Peter and Wendy. Also, child labor laws and stuff. Peter Pan was originally a straight play until it was turned into a novel and then much later a musical in 1954 (long after the original author, J.M. Barrie, had passed away… probably for the better). It was also made into a Disney cartoon in 1953, and a brilliant live-action adaptation of the novel was made in 2003 starring Harry Potter’s Jason Isaacs as Captain Hook. (If you haven’t seen it, Netflix that ish immediately!)

As you might have been able to tell by now, I am a huge, lifelong Peter Pan-phile. So, I was definitely excited to hear that NBC was reviving the musical for their next live broadcast, and for two very specific reasons:

1. With all the “origin stories” and bastardizations of Barrie’s work floating around lately (including the Neverland story arc on ABC’s “Once Upon a Time” and no less than 2 feature film “prequels” currently in development), it’ll be nice to get back to basics! I don’t think people fully understand the intricate and complex details of the source material. True, the musical isn’t exactly verbatim of the book or original play, but the themes are still present, if you pay proper attention.

2. Although the cast hasn’t been announced yet, reports indicate that NBC is looking to cast an actual GUY in the Peter role! Hallelujah! Of course, there’s speculation that Justin Bieber could nab the part. Well, personally, my vote would be for Austin Mahone. He’s an up-and-comer, he’s got great pipes, and he’s just the right age. It don’t hurt that he’s cute too. I would love to see him opposite Ariana Grande as Wendy. How cute would that be?? As for Captain Hook, I have heard someone mention Kelsey Grammer. That would indeed be an interesting choice, but it all depends on how the producers choose to portray the character – is he some ridiculous, bumbling fop? Or is he a dark, elegant villain? The latter is always my favorite rendition. If one wanted to get REALLY out of the box, how about someone like Adam Lambert? Oh snap, I would watch that for sure! (A friend of mine suggested Sacha Baron Cohen, and while that sounds epic, I don't know if he could be trusted on live television!)

So, suffice it to say, I am looking forward to this, but I am also cautiously optimistic. This could either be awesome or embarrassing. Don’t let me down, NBC!!!