'Mission: Impossible' Through the Years! 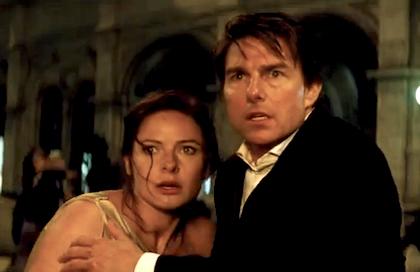 I gotta admit that I didn’t really see a 5th Mission: Impossible movie coming. Even a third one was kind of surprising, but the polls have closed and the results are in: people love this darn series! Don’t get me wrong, I quite enjoy the series myself, and even the harshest critic has to admit that, overall, it is one of the most interesting action franchises ever constructed. Why is that? Well, let me take you on a magical journey through the Mission: Impossible series...

Believe it or not, some people actually consider that the boring entry into the series! Well, I can assure you that 1998’s Mission: Impossible is anything but boring. I’d also like to dispel the rumor that it is an overly-complicated movie that makes no sense. Just watch the movie and pay attention to it and I assure you that everything will become clear. Sure, the villain’s reason for the conflict in question is a little vague, but it’s hardly an unbreakable puzzle or anything. The film, of course, stars Tom Cruise, but it’s not actually about him. He is the captain of the ship, but the crew and the journey are just as much at the forefront of the proceedings. This carries on the tradition of the television series, which also focused on a team and not just one character. Also in keeping with the the TV show is the emphasis on the intrigue. Later entries in this series will venture somewhat away from that, but we’ll get to that soon enough. Legendary director Brian de Palma is the man who brought us the first incarnation of Ethan Hunt and his merry band of spies, and the director’s masterful control of mood and fondness for odd reality is definitely noticeable at times. The film was, of course, a success, and as such, a sequel was only a matter of time.

Remember what I said about venturing away from the traditions of the television series? Ethan, Ethan, he’s our man! If he can’t leap off a motorcycle and spin-kick them in the head, then no one can! Famed director John Woo came onboard to helm Mission: Impossible 2, and he brought all sorts of goodies with him from his Hong Kong flicks. Gone is the team, much less the spy element, and in it’s place is stylized action of the highest caliber. There is still a mission, and Ethan has help, but they are mere footnotes in this smorgasbord of testosterone that also has a little something for everyone. You like ancient mythology? Well, then step right up and get punched in the face with it! You dig Michael Mann and Alfred Hitchcock? You can have the two of them for the price of one! Do you like Tom Cruise as an action star? I hope so, because this and the first Mission: Impossible film are the two movies that cemented him as such. (And no, Top Gun does not count. Cocktail is more of an action movie than Top Gun.) Seriously, though, the casual way that the film introduces that Ethan Hunt is also a martial arts master is kind of hilarious. Moving on, the film is an interesting experiment that succeeds on the most visceral of levels. With Mission: Impossible 2, John Woo successfully created a modern myth of sorts. Everything we are seeing feels not like reality but like something out of a post-modern fable. It’s probably the most chic action movie ever made, to be honest. I don’t know if I can call it a good sequel, per se, but it’s certainly an interesting and entertaining follow-up nonetheless.

And then there was Mission: Impossible 3. I’ve gotta be honest that I don’t really remember this movie too well, so this section will be brief. J.J. Abrams came onboard for this go-around, and with him he attempted to bring back the spy/team element that was missing from the 2nd film. One notable thing about the film is that it features the late Phillip Seymour Hoffman as the villain, and for once in the series, we have an antagonist worthy of the story that he’s in. Hoffman was fresh off his Oscar win for Capote, and the rule of Hollywood is that once you win an Oscar, you have to do a big budget adventure/action film of some sort. Well... okay, Art Carney didn’t do that, but somebody probably thought about it though! Getting back to MI3, it was still a unique entry into the series, and by now you should be seeing a pattern with all these MI films...

The 4th entry into the series that features a man’s strange obsession with heights, is undoubtedly the best of the bunch. Mission: Impossible - Ghost Protocol did what MI3 was attempting to do, just slightly better. And in the world of film, "slightly" can make all of the difference. Ethan is back and so is the action, but the team is once again at the forefront, and this time each member serves as an important part of the story instead of just existing to react to Ethan’s wild stunts. Brad Bird, director of The Incredibles and the upcoming Tomorrowland, helmed this entry, and to it he brought something that was being sorely missed in modern filmmaking: PRACTICAL EFFECTS! CGI was only used as a necessity, and, like a good filmmaker, he applies a simple little thing called "editing" to make the effects look real as opposed to just holding the camera on them like a man who has run out of ideas. Bless you, Brad Bird. You made a wonderful action movie in which I cared about practically everything that was happening.

Well, in case you missed it, the 5th Mission: Impossible film is flying into theaters on July 17, and judging by the poster, they forgot to include poor Tom Cruise on the flight manifest. This latest installment is being directed by Christopher McQuarrie, the Academy Award-winning screenwriter of The Usual Suspects. McQuarrie also directed Mr. Cruise in a film called Jack Reacher. I can’t comment on that film as I haven’t seen it, but I think McQuarrie will do a fine job. Plus, I dig the continuation of the trend of bringing in a new director with each film, giving them all a unique feel that could stand on its own if need be. The Mission: Impossible franchise is like an experimental lab where great directors can play around with new ideas. Sometimes they work, and sometimes they don’t, but the ride is always a fun one nonetheless.