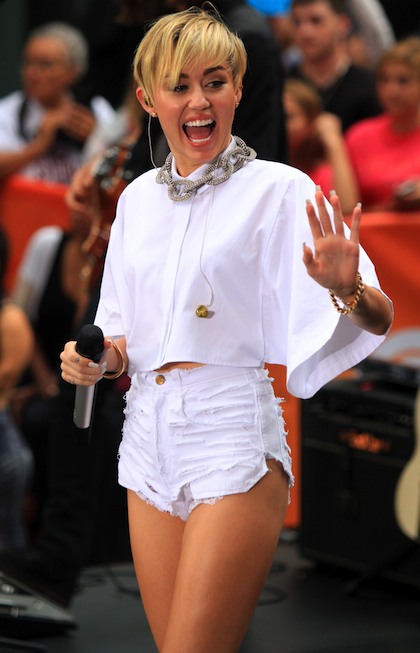 It’s been a long three years since her last studio release, and since then,Miley Cyrus has literally been nothing but the talk \of the entire town. Besides all the antics, the twerking, and all the headlines (a lot of them less than stellar) concerning whatever she has going on in her personal life, there is no question that Cyrus was indeed meant for this. Argue all you want about her music and its quality, but no matter what, you’d have to ultimately admit that Miley loves what she does, and what she does is make bangin' pop music.

Bangerz is Cyrus’s first album in over three years, and although it is not perfect, there is something to be said about all the attention it has gotten and how, despite the hype towards it, the record does indeed have very legitimate tracks. Hit-making producer Mike Will Made It is responsible for the bulk of the record, and his prowess for hip-hop/pop paired with Cyrus’s controversial spotlight has the potential to make for even more good music. For all intents and purposes, we’ll separate the bulk of Bangerz into three separate categories: The Good, The Alright, and The Misses.

Some of the best tracks on the album include “Adore You”, “Drive”, “Maybe You’re Right”, “Someone Else”, and our personal favorite, “Wrecking Ball”. What all these tracks have in common, besides some really great production, is that they all give a real-life and heartfelt glimpse into Cyrus’s life (all good music should tell a story) and all the turmoil she has felt in some of her past relationships. If all of her music was filled with more beautifully written lines like “So much for takin’ this too far, you can’t blame me for who I am” (“Maybe You’re Right”) and “I can’t live a lie, running for my life, I will always want you…” (“Wrecking Ball”), then Cyrus would really be the legitimately mature artist she so greatly seeks to be.

Despite having some all-star features with the likes of rappersNelly, Future, Big Sean, French Montana, tracks like “4x4,” “My Darlin’,” “Love Money Party,” and “FU” are only okay at best. Compared to the good tracks, these tracks give nothing much to the overall meaning of the record and are pretty impersonal. Included in this category is her controversial first single “We Can’t Stop” and the super flirty yet fun “#GETITRIGHT”. These tracks are good for dancing and having some fun to but don't express much emotionally, and thusly, only make them alright.

Very few albums are completely, 100% perfect, and fortunately for Cyrus,Bangerz has only two real big missteps, which include “Do My Thang”, an odd little tune where all Miley is really doing is attempting to rap, and “SMS (Bangerz)”, the title track that was supposed to be an amazingly fierce collab with pop queenBritney Spears but regrettably is only a silly modern day sampling of Salt N Pepa’s old-school hit “Push It.”

One of the hopes of this pop music lover and admitted Miley super fan since her Disney days is that Cyrus doesn’t wait long to continue to make more records. She’s good at what she does, and although that includes perpetually turning heads and stirring some controversy for her performances, her style, and her opinions, she has the makings of a fine pop superstar. Bangerz is just the start of what is sure to be a new chapter of her career…