Michael Fassbender's 'Frank' Has Us Scratching Our (Real) Heads 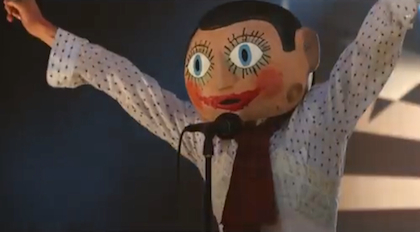 In my wrap-up of most promising films from this year's Sundance Film Festival, I mentioned a very eccentric and appealing movie by the title of Frank. Directed by Lenny Abrahamson and written by Jon Ronson (The Men Who Stare at Goats) and Peter Straughan (Tinker Tailor Soldier Spy), this strange little indie features Michael Fassbender as a mysterious and talented musician who wears a giant ceramic head all the time (yes, you read that right). The film follows Jon (Domhnall Gleeson) as he joins Frank’s band of misfits. Frank and company eventually land a gig at the grandest music and film festival, South by Southwest (currently going on as I write this!) and have quite a slew of adventures whilst there.

The trailer for Frank was finally released, and I am speechless. I’m not sure what’s the best part: the fact that Fassbender is completely committed to playing a character who wears a giant ceramic head the whole time (I mean, would YOU wanna cover up if you had a face like that??), Gleeson trying to rip Frank’s head off, or Maggie Gyllenhaal's dry one-liners. Take a look for yourself:

I personally love Frank’s Most Likable Song Ever, which I could actually see becoming a hit track (as disturbing as that is). I can’t wait to find out whether or not we ever actually see Frank’s actual face during the film. My favorite moments from the trailer include the fact that Frank paints make-up on his face, he attempts to throw a ball against a wall, and he gets hit by a car. I am smiling right now.

Frank will be released in the U.K. on May 2 and will hopefully come to the states shortly after!

Are you excited to see Frank?