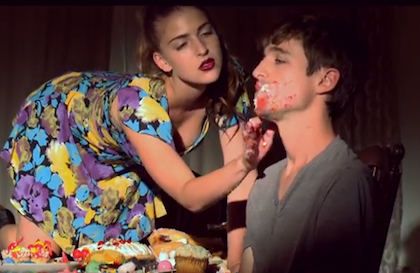 There have been some really great musical duos in our time. What would our twenty-something music libraries be without the likes ofShe & Him, The White Stripes,Matt & Kim, and The Black Keys?

And now, we can officially add a new act to the bunch, and they go by the name of Los Angeles’s own holychild.

Although not much at all is available about them, especially when it come to their background and how they were formed, it is with resounding confidence (and the anonymous consensus of many internet critics) that holychild are one of indie music’s next big thing, and can kind of be described as a mix of Katy Perry andBjork. Since we love both, these guys can’t be anything but good, right?

Consisting of super cute pair Liz Nistico and Louie Diller, the two make what they describe to be as “brat pop”; it is somewhat diffilcult to thoroughly describe and define exactly what that term means, but we can tell you that, whatever it is, brat pop is pretty damn great.

The combination of their very cutting edge instrumentals paired with Liz’s great-for-pop vocals makes for one joyous listening experience. Their music, which includes some well-known singles like “Playboy Girl”, “Happy With Me”, and “Best Friends”, can uplift even the most somber of moods, and in our book, that’s something to applaud.

Perfect for a beach day, a long drive down the shore, or a day of just being a young and reckless “brat”, holychild is definitely a duo we absolutely cannot get enough of.