Meet The Cast of Disney's 'The Lion King' Reboot! 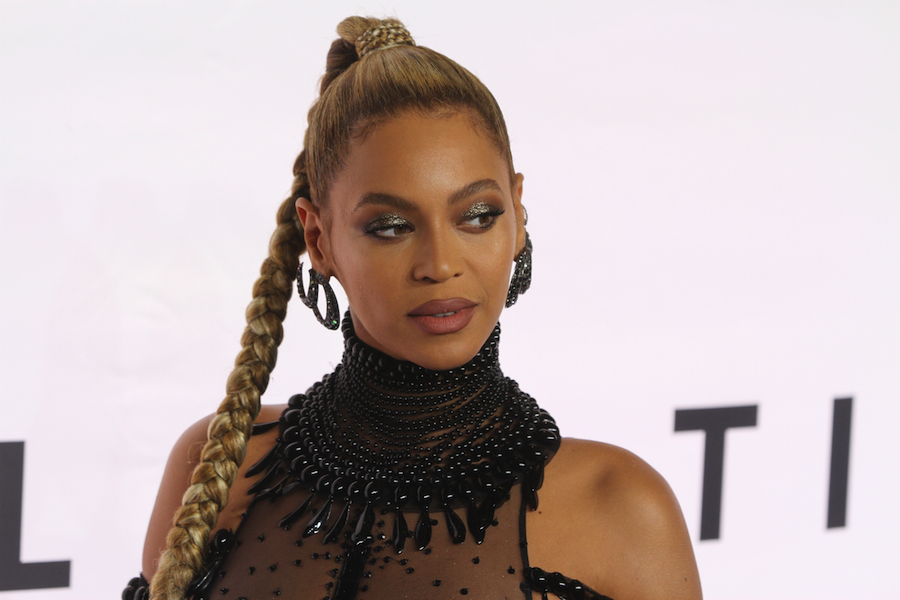 Disney's The Lion King is undeniably iconic, and it's easy to assume that the majority of Americans have seen the original 1994 animated version (if you haven't, you should get on it ASAP). It was the highest grossing picture of 1994 and is still the 29th highest grossing film of all time. That says something. The film also won two Academy Awards and two Golden Globes, featured an all-star cast and an incredible musical score by Hans Zimmer, including the unforgettably beautiful “Circle of Life” opening sequence, and also spawned a long-running Broadway show.

With seemingly all of Disney's classic animated films receiving live-action remakes these days, it was only a matter of time before this project received the green light. Although the original cast seemed impossible to top, the new lineup that was announced this week proves the contrary. 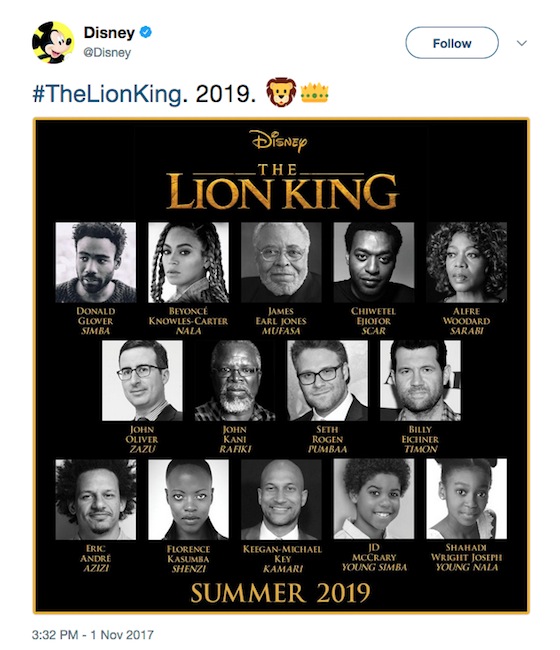 Reprising the role of Mufasa with his unmistakable voice, Disney had no choice but to ask him back. The remake could never live up to its original glory without him. Nobody could even closely imitate the deep god-like timbre that Mr. Jones possesses.

Matthew Broderick voiced Simba in the original but this time around the part went to Grammy award-nominated rapper and Emmy and Golden Globe-winning actor Donald Glover, which we've actually known about for a while now. If you want to brush up on some of his work, catch the Glover-produced “Atlanta” which he also stars in on FX. Or just listen to any of his music on Spotify.

She doesn't need an introduction, but this is one to be very excited about, as Queen Bey will be voicing Simba’s love interest Nala. Blue Ivy, the Twins, and the Beyhive will surely be very excited this. She never disappoints and we can’t wait to see what she pulls out of the hat.

The BAFTA-winning Nigerian-British actor who wowed us all in 12 Years a Slave (just one of his vast arsenal of incredible performances) will be voicing the film’s antagonist, Scar. Simba’s vindictive uncle was initially played by Academy Award winner Jeremy Irons, and we look forward to seeing the intensity that Chiwetel will no doubt bring to this sinister role.

The award-winning actress starred alongside Chiwetel in 12 Years a Slave and played Miriam Sharpe in Captain America: Civil War. As Mufasa’s wife and Simba’s mother Sarabi, it's a natural fit for this long-time film & TV veteran to be voicing the Queen of the Jungle.

The British comedian and host of his own HBO political talk show “Last Week Tonight with John Oliver” will lend his quirky voice to the equally eccentric bird Zazu. Zazu was originally voiced by Mr. Bean actor Rowan Atkinson, who lent the character his butler-esque accent to accompany the character's role as a domestic servant/guardian of Simba.

The South African actor, whom you will see in the upcoming Black Panther movie, will be voicing Rafiki, the criminally underrated primate shaman who holds up Simba in the opening sequence of the film. The Tony Award-winning actor will surely bring some theatrical flair to this project.

The comedian is perfect for the role of the kind-hearted and carefree warthog Pumbaa who, along with meerkat Timon, is one of Simba’s adoptive parents.

Eichner is also a comedian and will be teaming up with Rogen to play Timon, one part of the dynamic duo that raises Simba in his absence from Pride Rock. Eichner is probably best known for his hilarious man-on-the-street series "Billy on the Street" and as the hypertense Craig on "Parks and Recreation". He proved his acting chops in recent weeks with his appearance on "American Horror Story: Cult".

The stand-up comedian and host of "The Eric Andre Show" will be playing Azizi, the mentally unstable hyena that serves as one of Scar’s three sidekicks. Somehow the role seems perfect...

The actress who was born in Uganda and raised in Germany has had an exciting career so far that seems to be on a swift upward trajectory. She played Ayo in Captain America: Civil War (which Alfre Woodard, who voices Sarabi, also starred in) and will be reprising the role in the highly-anticipated Black Panther along with John Kani (Rafiki). She plays Shenzi, one-third of the hyena trio that act as Scar’s henchmen. Whoopi Goldberg voiced the role in the original -- no pressure, though!

Rounding out Scar’s loyal pack of hyenas is the incredibly hilarious and talented Keegan-Michael Key of "Key & Peele" fame. Everything this guy touches turns to gold, so we're definitely looking forward to this, especially seeing how he plays off of his partners in crime Eric Andre and Florence Kasumba!

The precocious actor who has already featured on Childish Gambino’s album, so it's only natural that he will be playing the younger version of Donald Glover, following in '90s icon Jonathan Taylor Thomas’s footsteps as Young Simba.

At only 12 years old, this actress already has impressive Broadway creds and is in fact reprising her role from the Broadway version of The Lion King. You might have also seen her kill it in NBC's "Hairspray Live!" as Little Inez. She will definitely be one to watch after this role.

We can't wait to see how it all comes together when The Lion King hits theatres in 2019!