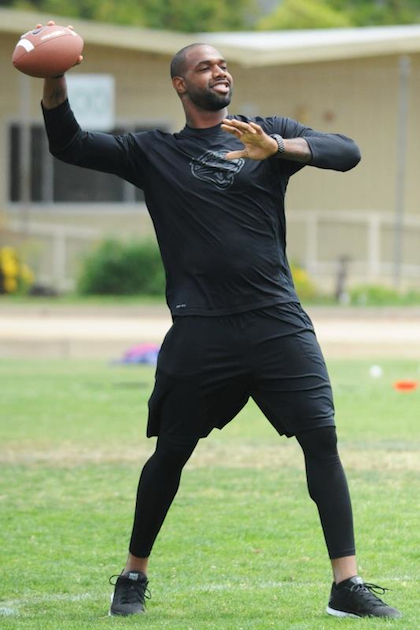 He may be playing for a team on the other side of the country, but that doesn’t mean he doesn’t go back to his roots every now and then.

The camp was held at Marcedes’s alma mater, Long Beach Polytechnic High School. Kids ranging from 7 years old to 17 years old gathered at the school’s football stadium for a day of fun, training, learning, and games.

What makes this event stand out is that it is free of charge to participants, relying solely on support from outside sources. It gives children of every background an opportunity to practice the true American sport of football. This is a quintessential way for a community to come together to support such an amazing cause.

Participants were not only taught the basics of football but also lessons that could be applied to everyday life, as reads the foundation’s website: “The purpose of our events is to teach young minds that there is more to life than football and other sports. We promote the concepts of embracing discipline, teamwork, and the importance of education. All too often we lose focus on what’s important. The more important thing in life is the future of our children.”

A record 600 kids showed up for this year’s football camp, which is huge considering that only 200 kids showed up for the first year. Each camp goer received a Marcedes Lewis Foundation drawstring bag containing a signed photo of the football star. They also got camp T-shirts that can be seen worn on the kids year-round. For lunch, Naples Rib Company catered, and DJ Stylez brought the beats and played all day long to keep up the energy. 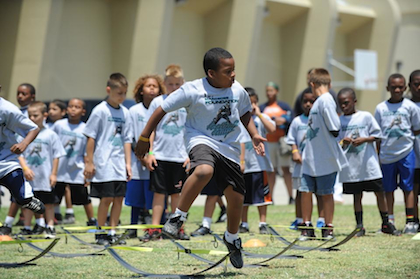 Marcedes reflected on what inspired him to start this up in the first place: “There wasn’t anything like this around when I was a kid, and if it had cost a lot of money, we wouldn’t have been able to afford it anyway. To open it up like this, it means more that way.”

Nothing is better than seeing someone who has truly made a name for himself and is using it to give back to his community. The camp is a great experience not only for the kids, but also for every single individual involved one way or another. The success of the Marcedes Lewis Foundation Football Camp will only become greater as the years progress.

More info on Lewis's foundation and the 2013 Football Camp here:

Plus, Young Hollywood crashed the tight end’s pad not once, but twice!  Check out where Marcedes Lewis calls home in Los Angeles here: