'Magic Mike XXL' Helps Us Remember the Ladies in the Audience Too! 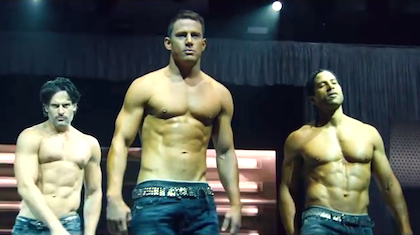 It's Independence Day, folks, and what better way to celebrate than with a brood of hot-blooded American MEN?? (emphasis on "hot")

When the word “striptease” comes to mind, most people automatically think of women – particularly good-looking women with big hair, high heels, and perfect bodies. Like it or not, that’s just a fact. But hey, we’re not hating! I mean, how could we with classics like Flashdance with the stunning Jennifer Beals?

Many films surrounding the “striptease” motif have been made throughout the years, but they all have one thing in common – they cater to the male gaze by focusing only on women. Movies like Show Girls with Elizabeth Berkley, Closer with Natalie Portman, Sin City with Jessica Alba, Planet Terror with Rose McGowan, and, of course, Striptease with Demi Moore. Yes, even women love these films, but what do ya know what women love more? Movies that cater to THEIR desires and point of view!

The striptease game within film has recently been forever changed, and we have Screen Gems to thank for that!

Yes, we’re talking about Magic Mike XXL! The wait for the highly-anticipated and long-overdue release of the Magic Mike sequel is FINALLY over, and you can officially go see Channing Tatum, Matt Bomer, Joe Manganiello, and Adam Rodriguez shimmy, shake, and shine (or glisten) in theaters everywhere however many times your eyes desire.

Now, don't get us wrong -- we love the 1997 classic The Full Monty and its lineup of average, everyday blokes gettting their kit off (as the Brits say), but there's no denying the star -- and ab -- power of TATUM, BOMER, MANGANIELLO, RODRIGUEZ. Thank you very much.

Because females have been the main focus of stripping-related films for so long, the Magic Mike phenomenon is making women jump for joy for more reasons than just those sweet, well-oiled six-packs – yes, the kind you can get a buzz off of without having to consume all those carbs and calories. #Gold! But I digress... Aside from that, thanks to the birth of Magic Mike himself, women can finally watch a film full of strip-teases and hot bodies that appeal to OUR eyes; Ladies need something to ogle sometimes too.

This summer, Hollywood truly made up for that by giving us not only Magic Mike XXL but also, Chocolate City with Tyson Beckford. So, if this is your way of replaying us, Hollywood… WE FORGIVE YOU!

So ladies, after you catch Magic Mike XXL in a theater near you, treat yourself to Chocolate City for dessert – both well-deserved and ABS-olutely amazing.