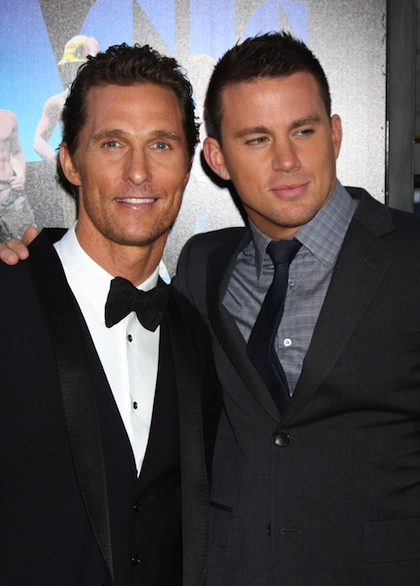 If you enjoyed Channing Tatum shirtless and shaking his goodies, then you’re in luck! Tatum, along with Matthew McConaughey and the beautiful boys of Magic Mike are getting ready to strip down to their skivvies once more. Magic Mike has officially gotten a sequel, and the title is simply delightful: Magic Mike XXL.
I have no idea what the title is in reference to, but I have a few theories. Theory #1: The title is a subtle nod to the gentleman’s own magic mikes (wink wink!). Theory #2: A new stipper joins the group who is a much more prosperous gentleman. Theory #3: In the sequel, Matthew McConaughey and Channing Tatum are cloned, hence bringing twice the fun (literally!).
The actual screenplay of Magic Mike XXL is being penned by Tatum himself and Reid Carolin, and neither one has revealed any information regarding the storyline. However, Magic Mike XXL does have a director. Steven Soderbergh’s go-to assistant director Greg Jacobs will take the reins from Soderbergh. Joe Manganiello, another one of the sexy strippers from Magic Mike, has mentioned that filming for the sequel is set to start this fall. Hopefully this means Channing & Co. will be gracing our screens in the summer of 2015!
Are you excited for Magic Mike XXL? What do YOU think the title could mean?
- Sarah Osman, YH Staff