Mackenzie Foy Shines In Trailer For Disney's 'The Nutcracker and the Four Realms'! 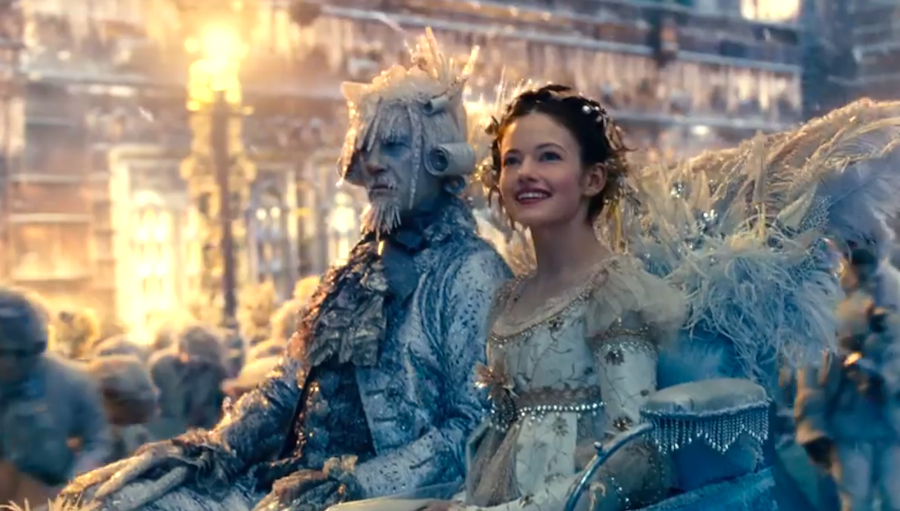 Actress and model Mackenzie Foy continues to progress through the ranks of young Hollywood as she makes the jump to leading lady in Disney’s latest fantasy adventure The Nutcracker and the Four Realms. The actress, who is best-known for her memorable moments in the horror film The Conjuring and the sci-fi masterpiece that is Interstellar, will be starring in the film directed by Joe Johnston (Captain America: The First Avenger) and Lasse Hallstrom(Chocolat). Now, 6 years after she made her feature film debut in Twilight: Breaking Dawn, the 17-year-old actress will lead a cast of all stars that include Keira Knightley, Helen Mirren, and Morgan Freeman.

Disney recently released its second trailer for The Nutcracker and the Four Realms, which is centered around Foy’s character, Clara, a determined young girl who’s tasked with saving the magical world that her late mother invented. This wondrous trailer, which features a slow cover of No Doubt’s “I’m Just a Girl”, is a clear indication that this is not a film you want to miss.

Along with the amazing trailer, Disney has amped up its promotional run for the film inspired by the classic E.T.A. Hoffmantale, and Foy takes center stage in this breathtaking new poster.

Check out the all-new poster for #DisneysNutcracker and the Four Realms. pic.twitter.com/sESwbvUk4v

Before headlining a Disney film, Foy got her start playing Renesmee Cullen, the daughter of Bella and Edward, in the final films of the Twilight series. Her debut came toward the end of what was at the time one of the biggest franchises in the game, and looking back, she definitely handled it like a boss. Not only was she holding her own with the likes of Kristen Stewart and Robert Pattinson, who are two indie powerhouses now, but she also kept the production in check with a swear jar. Foy discussed all this and more when she stopped by the Young Hollywood Studio way back when Twilight was all the rage.

Foy has come a long way since her Twilight days and has definitely cemented her status as a promising up-and-comer, especially after winning the 2016 Saturn Award for Best performance by a Young Actor for her role as Murph in Interstellar. She can also be heard lending her talented vocal skills to The Little Prince, the 2016 animated version of the classic 1943 novella that is the most-translated book in the world and was voted the best book of the 20th century in France. Forbes even has her on their list for their choice of who should play Supergirl in the highly anticipated DCEU film currently in development.

The Los Angeles native will no doubt continue to showcase that she is a force to be reckoned with in the industry, but before she becomes a household name, the actress is looking forward to her next big adventure -- her senior year of high school.

Foy, who has been acting almost her entire life, seems poised for success when her visually-stunning Disney film hits theaters. The Nutcracker and the Four Realms will be a big moment for her, and everyone should be marking their calendars to witness it.

The Nutcracker and the Four Realms is in theaters November 2, 2018!