Live From New York, It's an SNL Documentary! 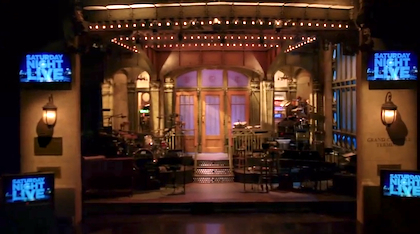 In case you didn’t get enough out of the “Saturday Night Live” 40th anniversary special, then veteran “SNL” costume designer Tom Broecker has a treat for you -- he’s produced a documentary about “SNL” called Live From New York! The documentary will cover all 40 years of the show and feature interviews with original cast members all the way through to the current cast today, plus interviews from special hosts like Alec Baldwin, Candice Bergen, and John Goodman. (Broecker insists there are much more than that but doesn’t want to spoil it for anybody.)

Check out the trailer:

Looks like it’ll be a fun and different kind of documentary rather than just a parade of talking heads sharing anecdotes. On top of making the format a bit different, Broecker has urged that this documentary will not bring up old behind-the-scene scandals and will instead focus on the positivity and cultural impact of the show over the years, which is by far a much stronger way to go about profiling such a historic show. Kudos to Broecker for resisting sensationalism!

At this point now, you’re probably asking, “Oh, Internet writer, where can I see this awesome documentary called Live From New York!?” Well, Internet reader, because you asked so nicely, I will tell you. Right now, this film can only be seen exclusively by residents of New York City, as it will be premiering at the Tribeca Film Festival on Wednesday, April 15. There are some more listings for the following week in New York City, so click this link to see if you can make it!

For the rest of us living somewhere else in the country, check out this link instead. The folks behind Live From New York! are providing the rest of us with an email reminder for an upcoming showing near you!

Do you want to see the new SNL documentary?